The day started early, since my sketch crawl (walk) should take part in another city.
The bus left at 06.22 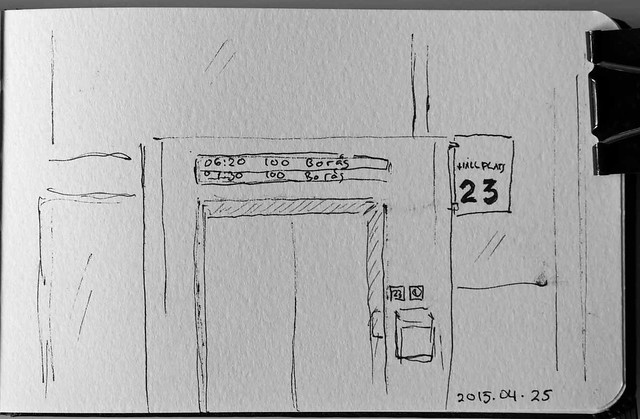 Borås is a nice little city and it was only a short walk to the Arena where the start of the Linneus Walk was. I did not know that this walking event was one of them where military people walk whit a backpack filled whit stuff so it is heavy…. But it was.
One of the groups where from Holland and they walked in formation the whole time (21 KM). There were people from all around the globe, the most eccentric must have been a 81 year old Australian who was blind, and it was his fourth time in Borås.

Anyhow, the start went of, it was between 8 and 9 so there was no hurry. And after some kilometer we entered the zoo.
Some long gone dead creatures was the first to show up. 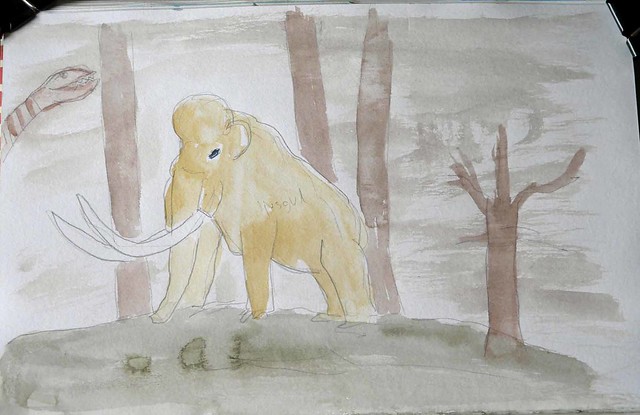 Its now living cousin was out in there backyard, waiting to be let out on the savanna. 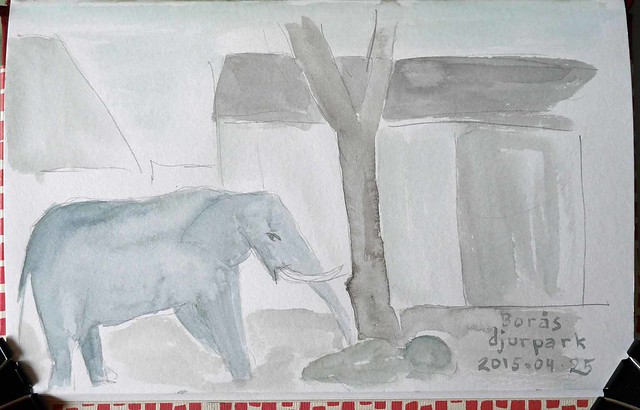 This paper make all the colors very pale, it is fun to use and you can really mess around a lot with water and color and the paper are not destroyed, but the result are often a little disappointing. Contradictory, I know. It is the Fabriano hard cover book whit bricks on.

It was still early and the most animals was still inside, a huge group of African Wild dogs was rambling around, playing and chasing each other and a Lynx was nearly visible. They waited for breakfast I think. The lions was absolutely waiting for breakfast. I have never been eyed with such intensity by an animal before!

I had to good speed to stop, it was fun to walk. We went into a stunning forest and I have had enough with glimmering emerald green moss for the rest of the year. I did not do as many sketches on the walk as I had hoped. But at a small lake I sat down and tried to sketch a jetty. 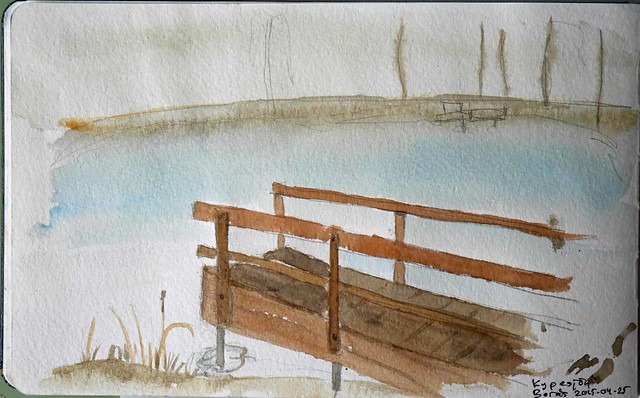 Later back in town after 6 kilometers of rather slow walking I found a very old building, then it started to rain in the middle of that sketch so I tried to fix it later with some ink.
The rain lasted for the rest of the 10 KM. 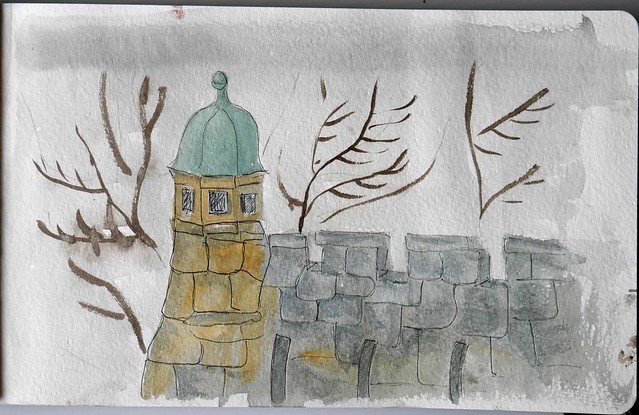 After all, this walk is because of Linné, so I draw an eaten and half destroyed fir cone and a small birch twig. Something botanical …, I can’t paint flowers when I’m outside. 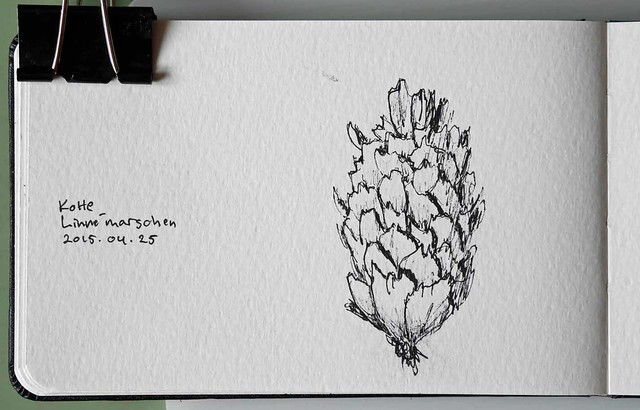 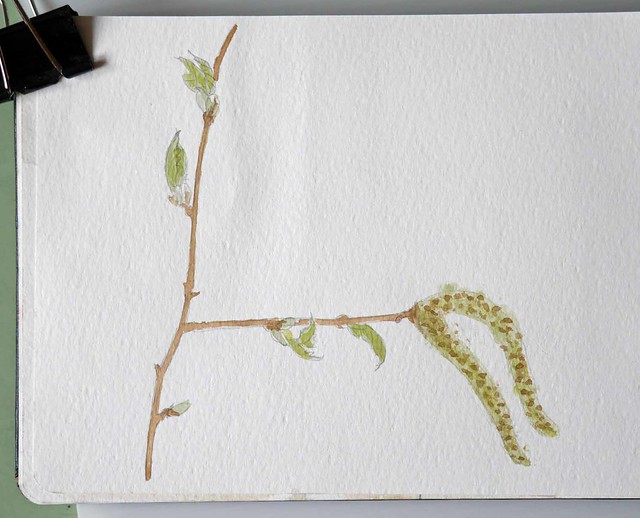 Just before I was going home I did two house sketches. Borås is filled with nice houses and buildings and many of them are quite special.
This one turned out very well. 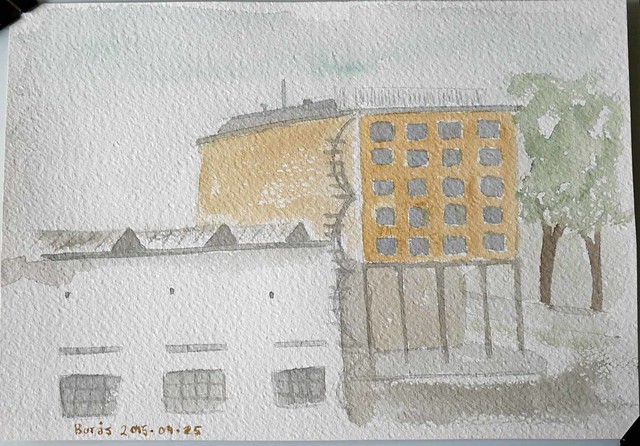 I was back home 16:20 – a long but satisfying day.
Next time I will find a nice spot and stay there and do all my drawings from one place! I was very sore in my legs the day after …
And yes, I got as medal 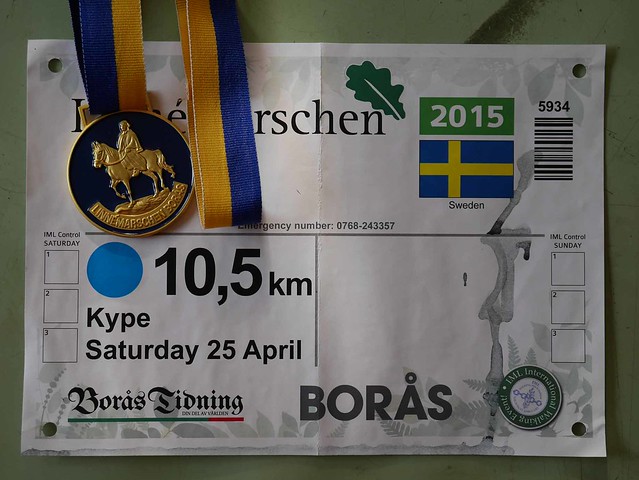 Love all the sketches, especially the elephant ones.