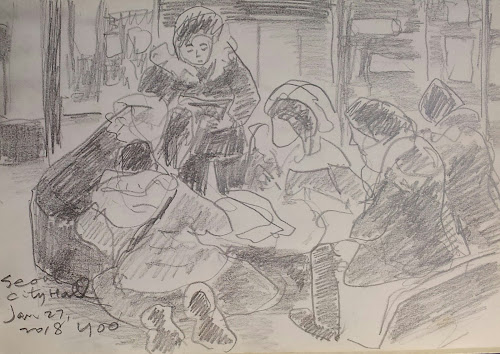 Kids were writing the texts after hearing from their teacher's explanation. 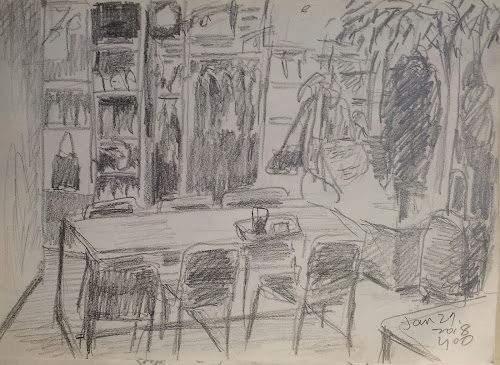 In the B1 there locates shop and cafe where people can buy organic goods imported from east Asian countries for fair trade. 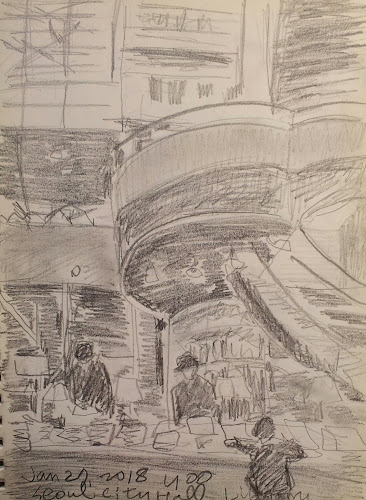 In same floor we can meet Seoul book shop where citizens or tourists can buy books or magazines related with Seoul. 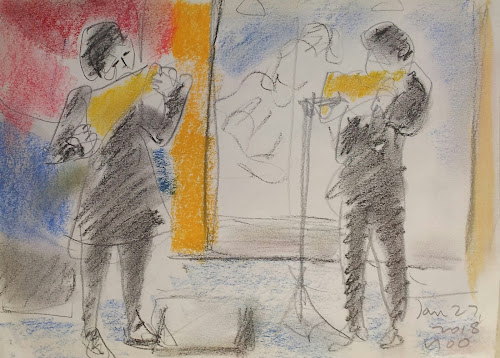 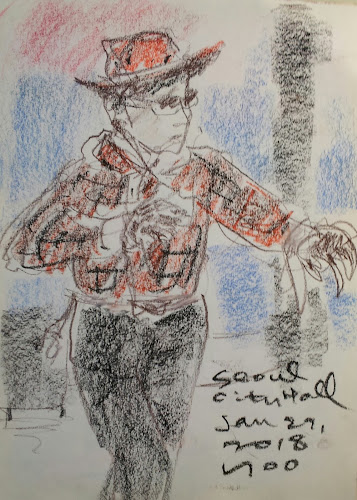 When the flute players "Pan Ulim Ensemble(팬올림앙상블)" began to play an old man started to dance. People enjoyed the music and his dance too. 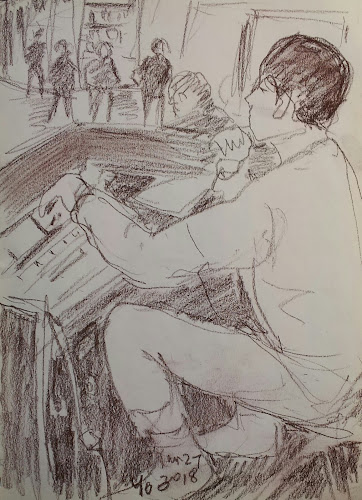 I sat near the sound engineer and drew him. 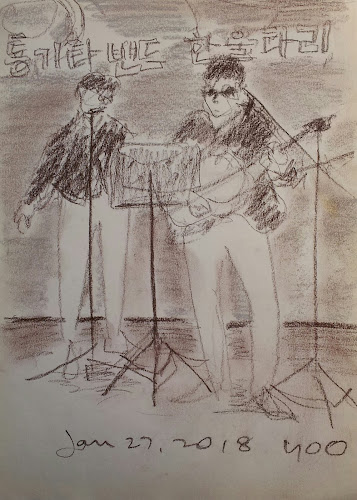 A singer and a acoustic guitarist of band "Hanultari" 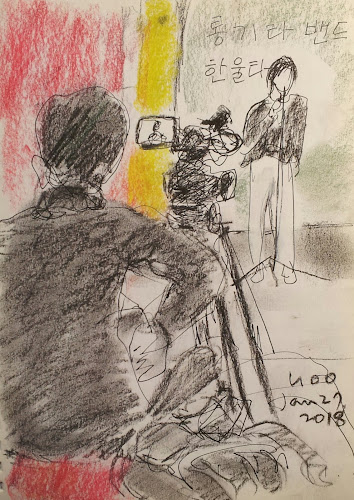 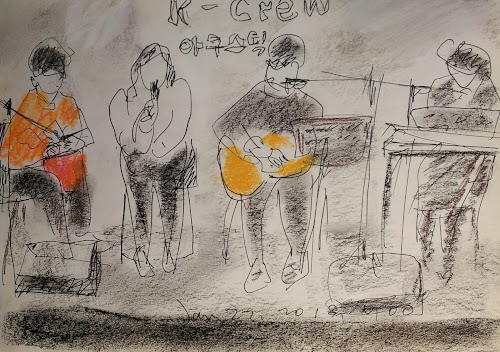 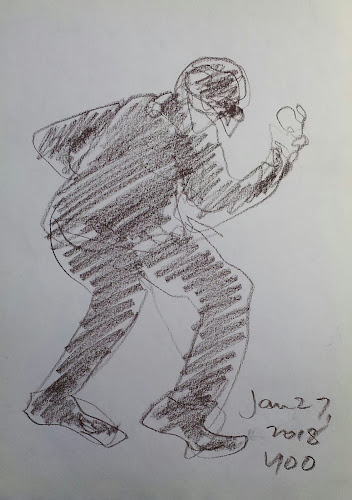 I used 30 x 21.5 cm sketchbook with pastels, pencil, pen, conte, and charcoal. Hearing nice music all the while sketching was great. We were glad to be inside on cold winter day. In the newly built Seoul city hall there are enough space for exhibiting, performance of music or dance, and educational purposes, etc. Office workers or old people gather to hear music at noon. Especially on weekends four times' different programs are played. We enjoyed sketching and healing ourselves through performances with people.
While I stayed inside the city hall other passionate sketchers went to other places nearby. We shared all the works done at the same floor after finishing on 4:30 pm.
Participants : YH Lee, JE Choi, MO Kim, HS Lee, EJ Kang, MJ Kang(new comer), BH Yoo

16 people signed in with me for Tallahassee sketchcrawl...this is might be the most people attended in Tallahassee.
I posted my own sketches just to get the page started, but others will post soon.

Our friend Barry plays the pan pipe. He played at this festival at our Florida History museum and one of the artists sketched him. I hope she will upload images soon.

Like you, I also worked on 21x30cm paper this time (about double my usual size paper) and enjoyed it very much.

As always I had fun looking at your drawings, and anticipate even more from your group.
I will check back tomorrow and next days.
Mark
Mark Fletcher, Tallahassee, Florida, USA
"Don't Hurry, Be Happy!" = copyrighted trademark
http://www.markfletcher.embarqspace.com
Top 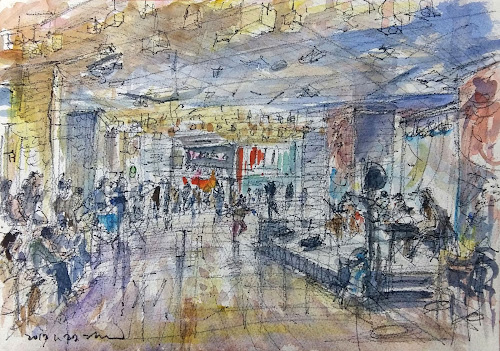 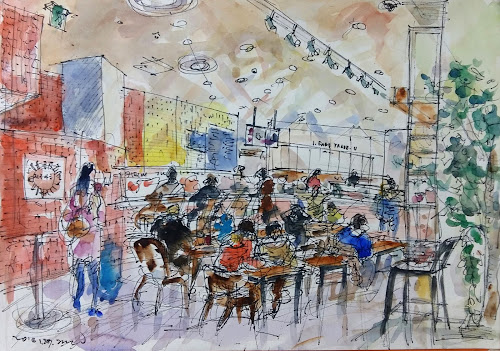 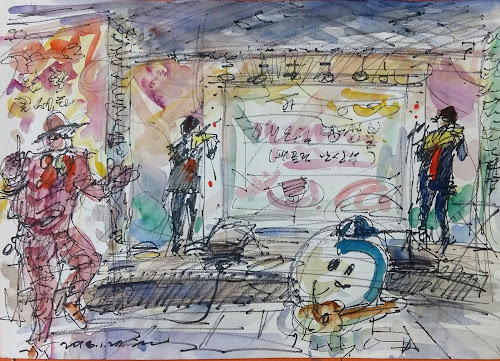 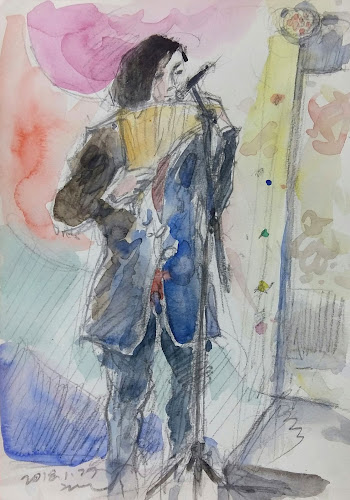 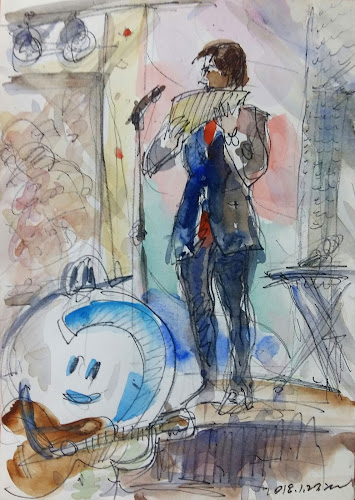 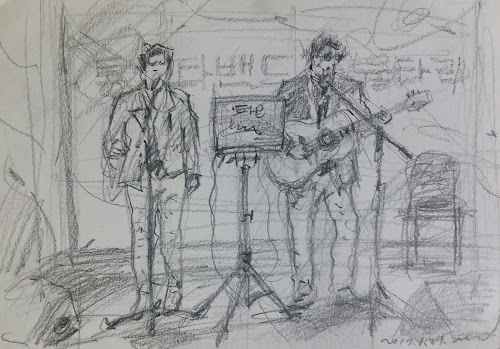 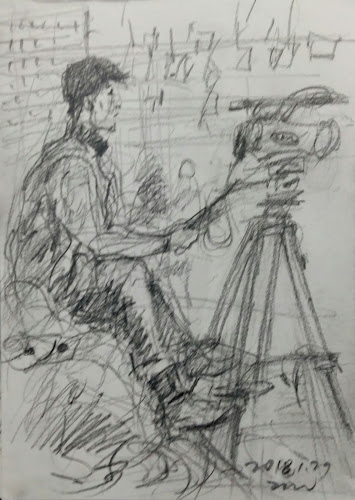 The weather has been bitterly cold the past few days. Last Saturday for the 58th World Wide SketchCrawl, it's hard to sketch outdoors, Seoul urban sketchers met at the Seoul Citizens' Hall inside Seoul City Hall building. Seoul Citizens' Hall is housed in the two basement levels of Seoul City Hall. The hall has been renovated as a public area for citizens and visitors. Exhibition, performances, seminars, concerts, special events, and wedding ceremonies take place here all year round.
It's a great place for sketchers to draw a lot of the amusing scenes regardless of weather. I sketched the vivid interior scenes including some musical performances with other sketchers. We had a pleasant SketchCrawl in an enjoyable atmosphere!
Archiartist Lee Blog : http://archiartistlee.blogspot.com/
Seoul Urban Sketchers Blog : http://urbansketchers-seoul.blogspot.com/
Urban Sketchers Blog : http://www.urbansketchers.org/
Top 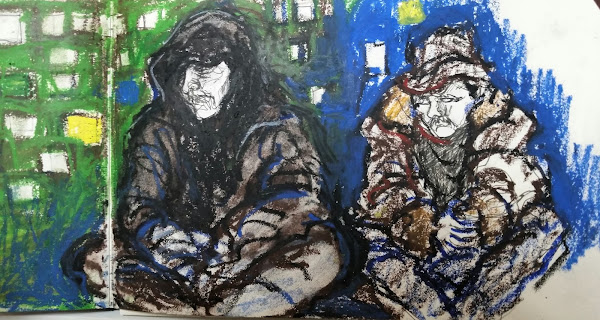 JANUARY 28th, 2018
Around the Seoul city hall for worldwide sketch crawl with urban sketchers .
I tried to capture the homeless man in a sketchbook.
The dark and impassive man was in the long silence.
The small old man with a long face was sobbed quietly holding his cup noodles in his hands.
As the music concert began, they disappeared into the crowd.
Today , it's a harsh winter with a temperature of minus 15 degrees.

The Seoul citizens hall provides a complex cultural space for citizens.
It's a warm place that is always open to everybody .
You can see performances, exhibitions, movies and use libraries any time.
There are a bookstore, a fair trade store also cafes.
It's a very stylish and modern interior that stands out.

A sitting man in the citizens hall of Seoul city

Hyunsook Lee's urban sketching
I uploaded these works instead of her.

Drawing in the Citizens Hall of Seoul City Hall 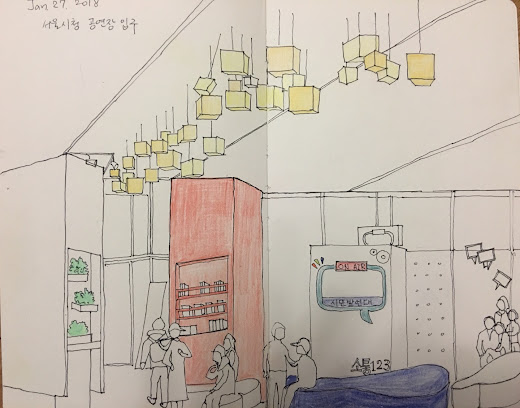 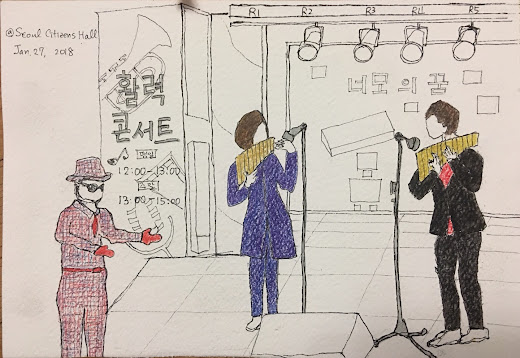 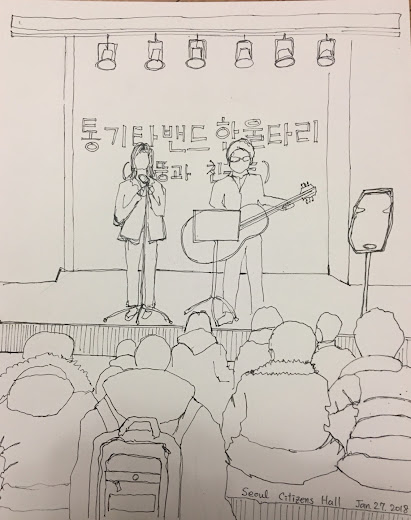 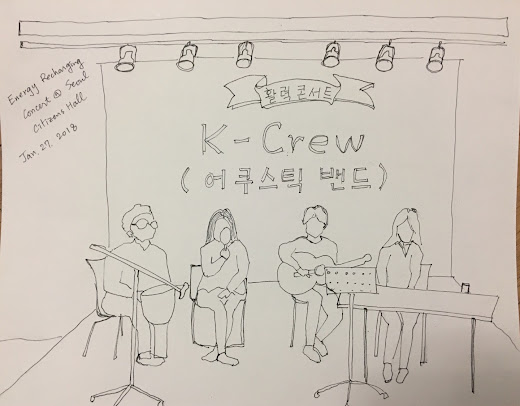 Last Saturday, I participated in the meeting of Seoul Urban Sketchers. Despite the very cold weather, we met at the Citizens Hall, situated on the 1st basement level of Seoul City Hall. We was supposed to sketch all over the place inside of Citizens Hall. Since Energy Recharging concerts were performed by civic artists everyday at noon, I have mainly drawn the performers, the audience, and the surrounding figures. It was fun to sketch while listening to music.
Last edited by Eun jong Kang on Sun Jan 28, 2018 8:21 pm, edited 1 time in total.
Top

Jecs Choi 's urban sketching
I uploaded these works instead of her.

On the first basement of Seoul City Hall 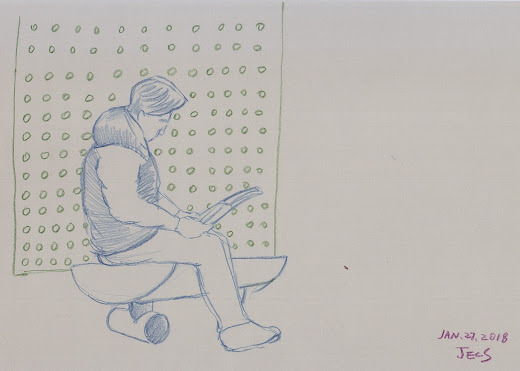 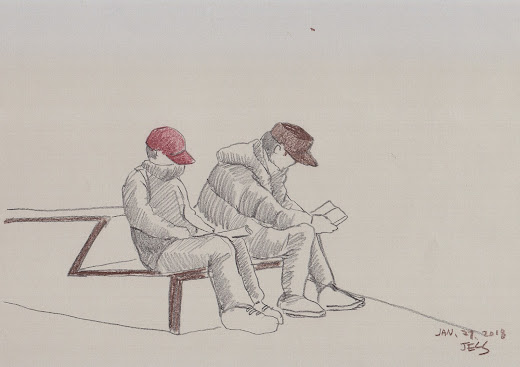 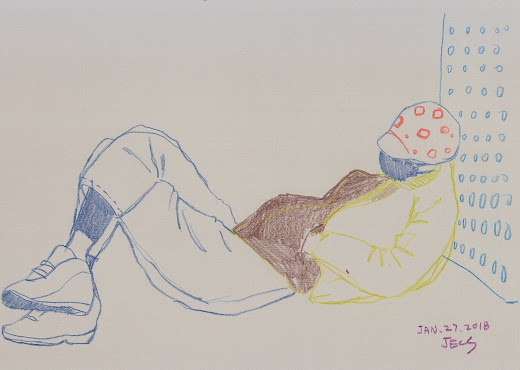 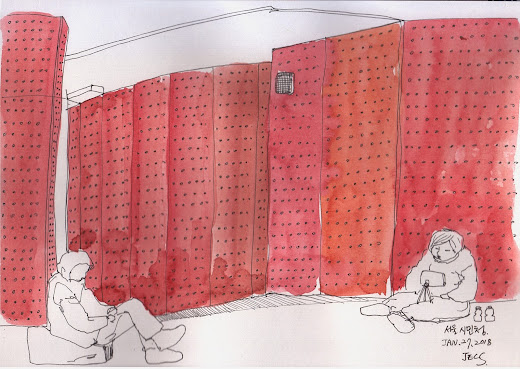 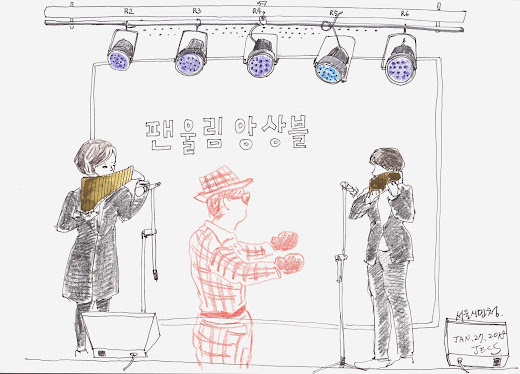 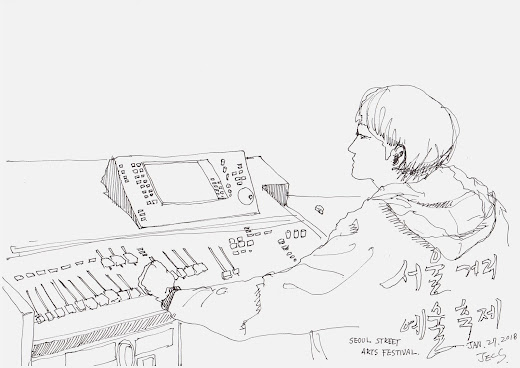 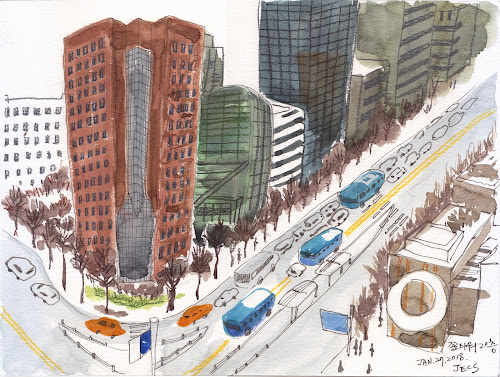 It is hard to draw in the outdoors because of the cold weather.
So this time, we sketched on the first basement of Seoul City Hall.
There was a music concert every weekend.
I have sketched performers,viewers and many others.

Very lively and impressive drawings, I like them all.
Top

Thank you, BH Yoo!
The Seoul artists are so talented!
These sketches of Seoul Sketches cheer my heart.
I especially like your lines of movement around the people.