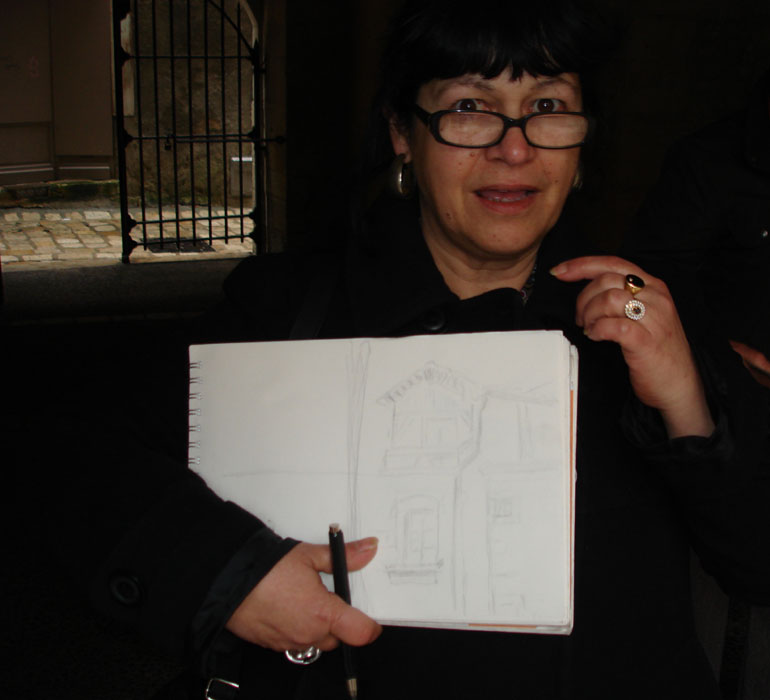 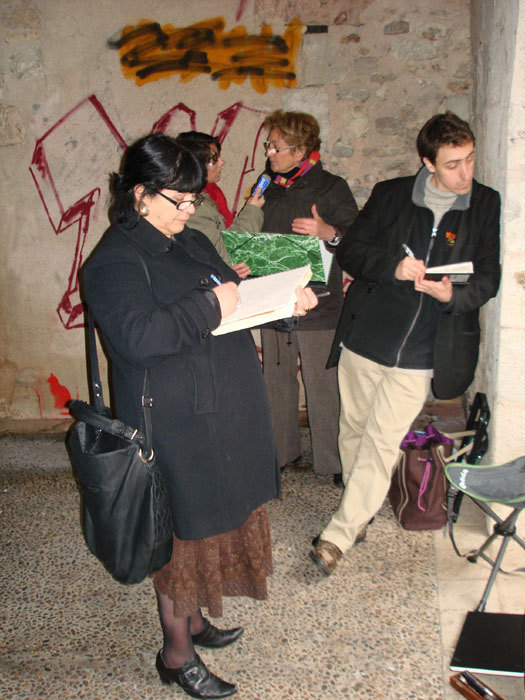 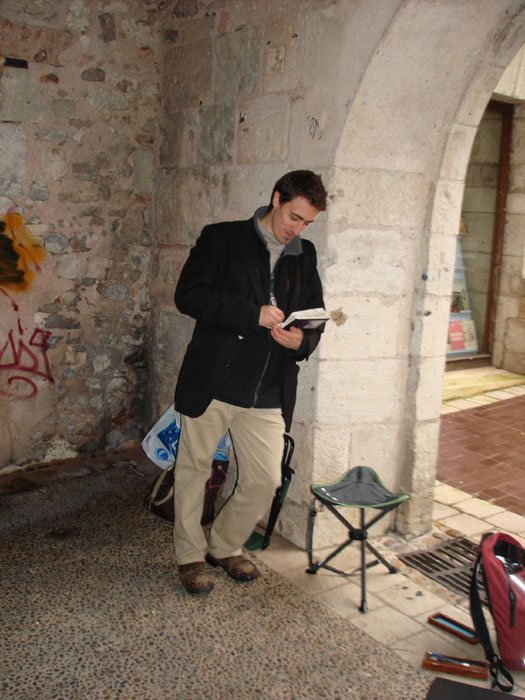 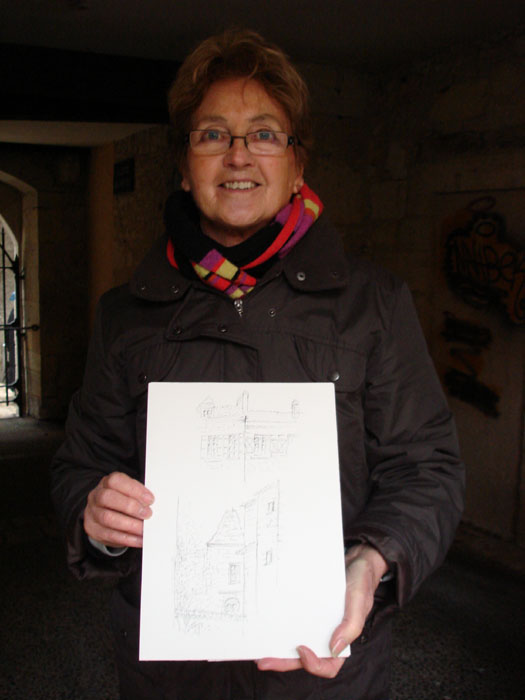 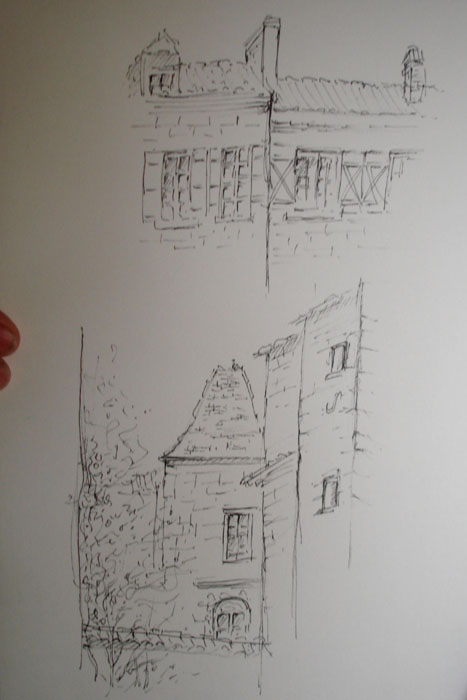 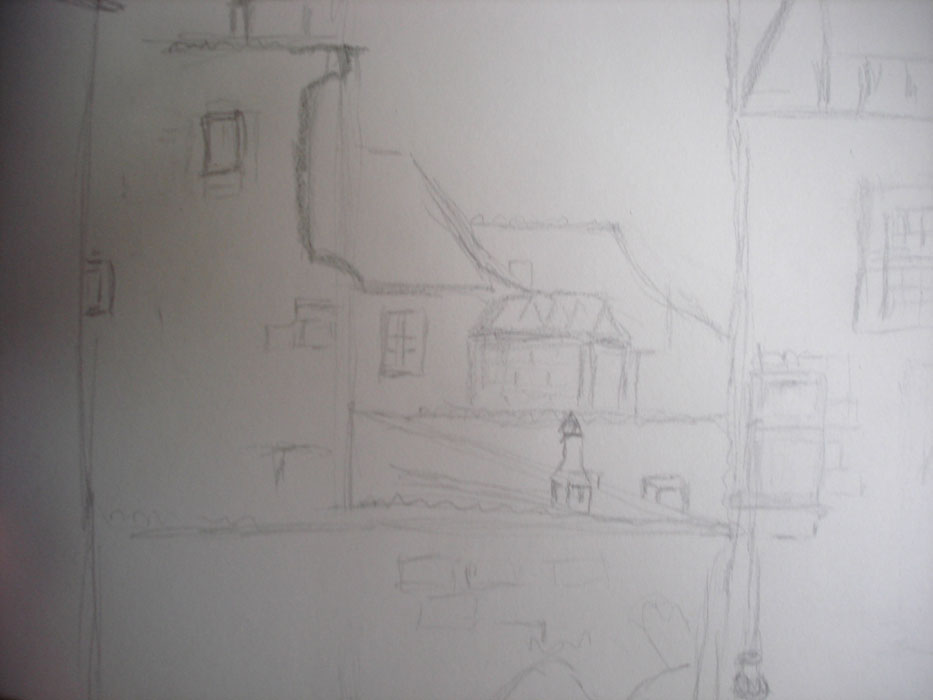 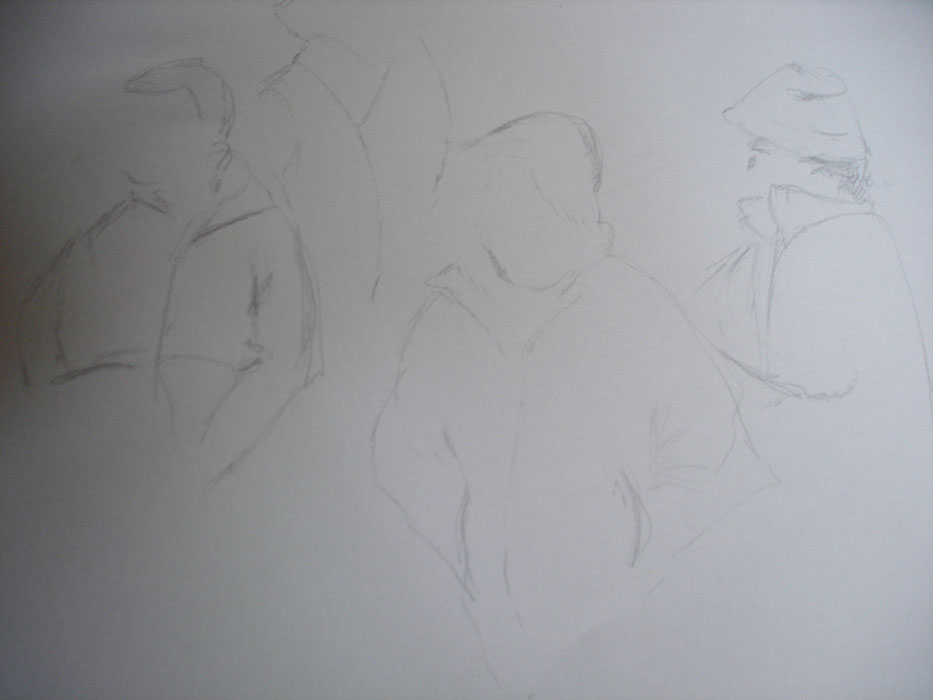 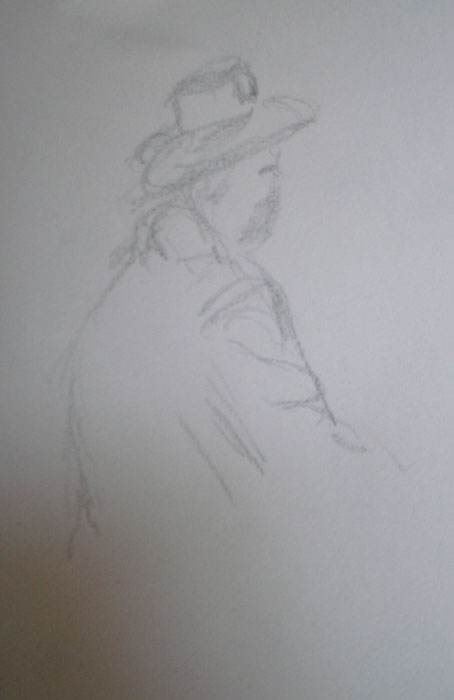 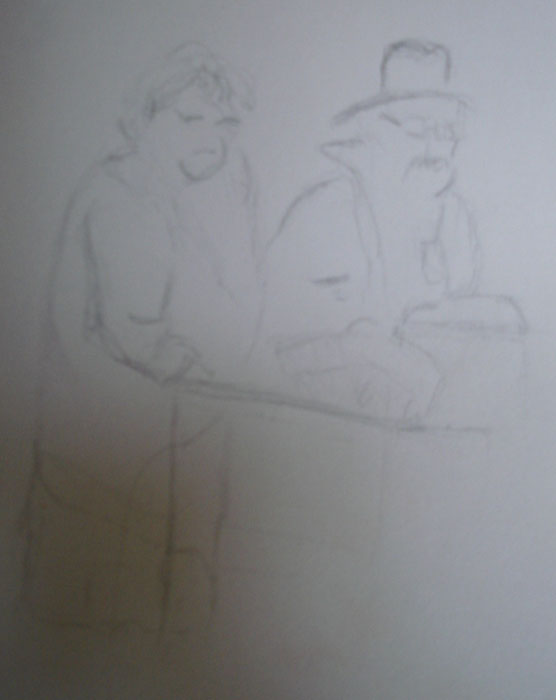 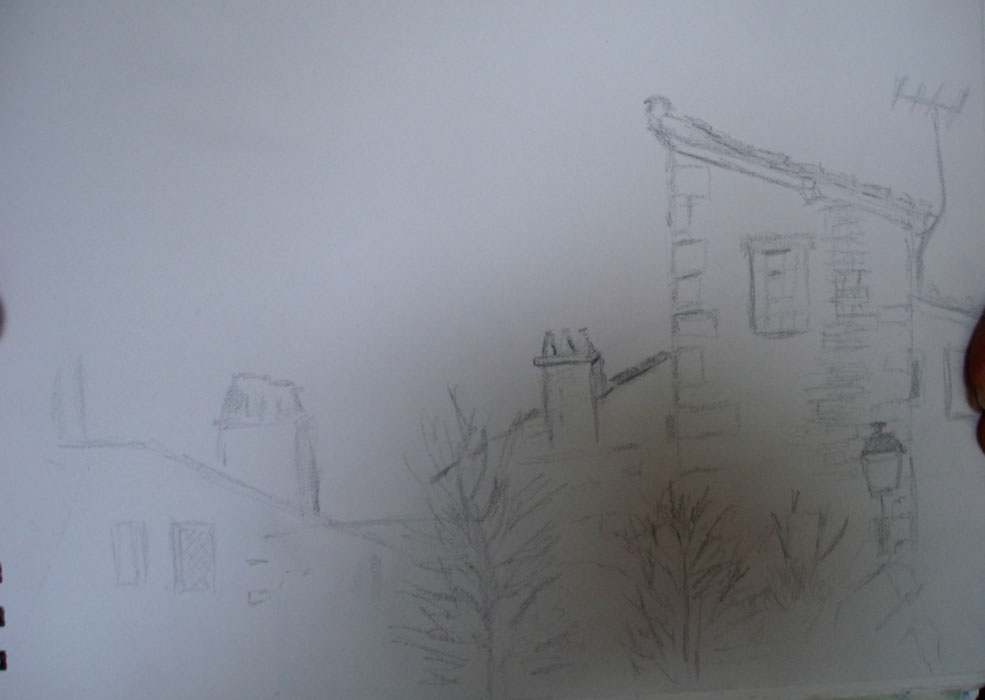 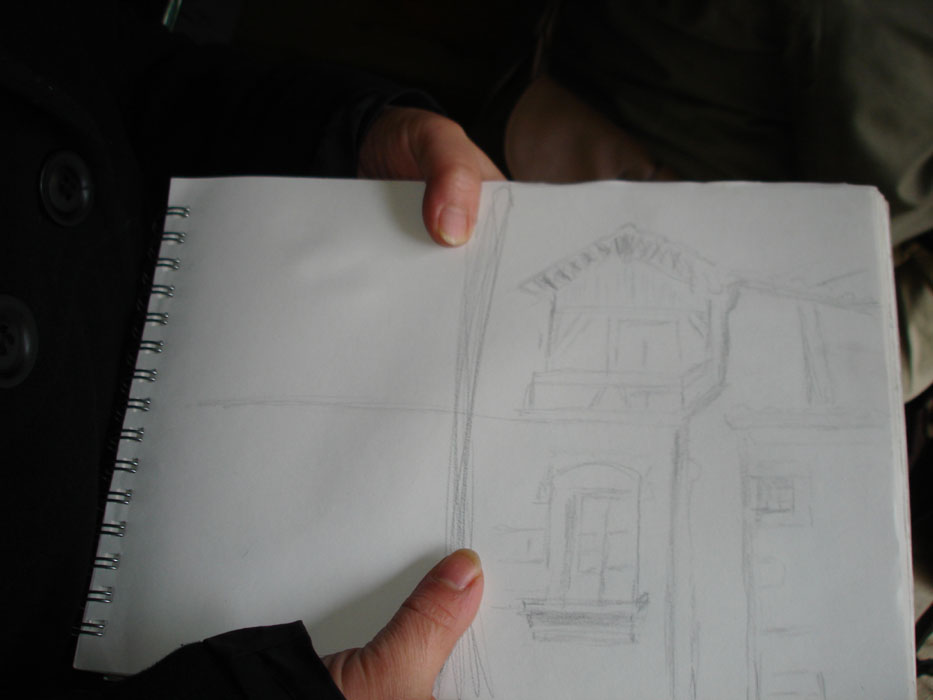 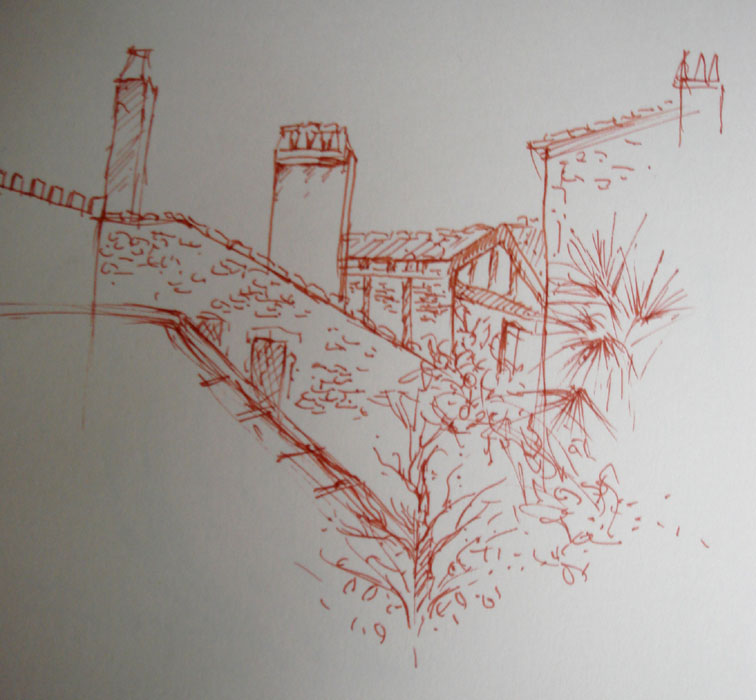 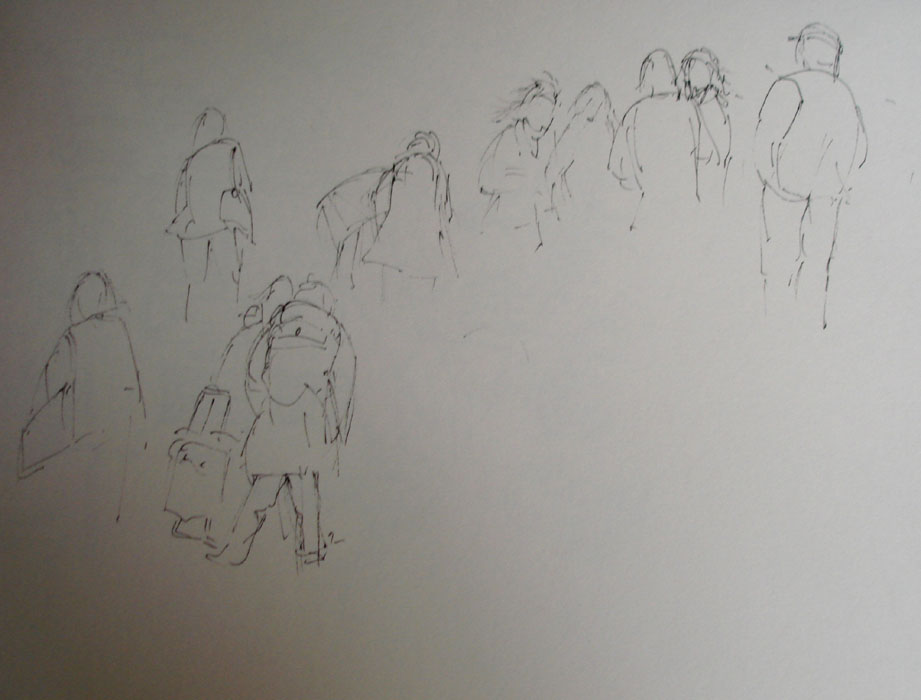 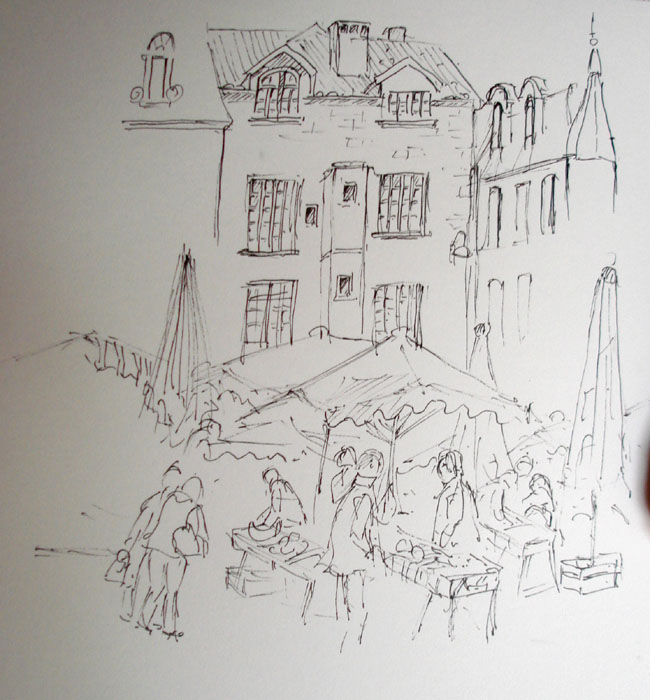 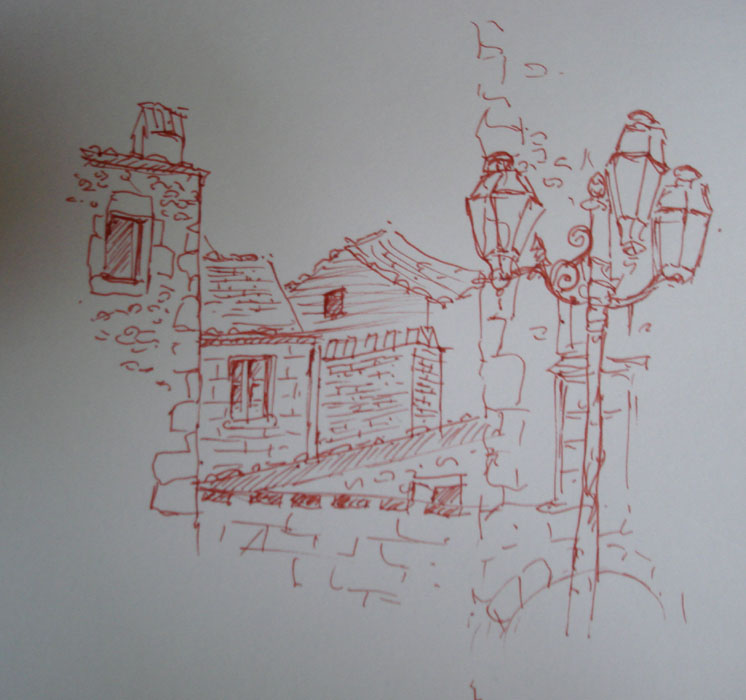 - thanks for sharing your impressions, Pascal!

Have you been interviewed? Second foto from top looks like

Hi, after a long day of drawing, after scanning my draws, i'm unable to download my pictures on my ( B...F... )site. Sorry, I'll try tomorrow
Top

I start drawing as soon as I wake up, waiting for the sun to emerge from the << vanishing point >> while my my coffee was getting colder. Then I left home to go to the rendez vous with the other sketchcrawlers of Périgueux. We were only four, but motivated. The morning was cold and with a little wind on our necks, then after one hour we finished in a bar. We returned drawing outside on a market, and then had a rendez vous with a journalist. There was too a politician called Jean Lassale, he was visiting the market, we sat with him to tchat a while. He is in the fifth image with a straw hat on his head, a hat given by the journalist, well, too ong to tell, but really a funny moment. Then we went eating, and returned at work, but the rain had started, and it was impossible to keep going, as you see on the seventh image, I was unable to finish the draw; I keep it for a future sunny day. A radio journalist joined us to ask a few questions about sketchcrawl. I finished the day in the bar, the last image, for an interview with a local TV. 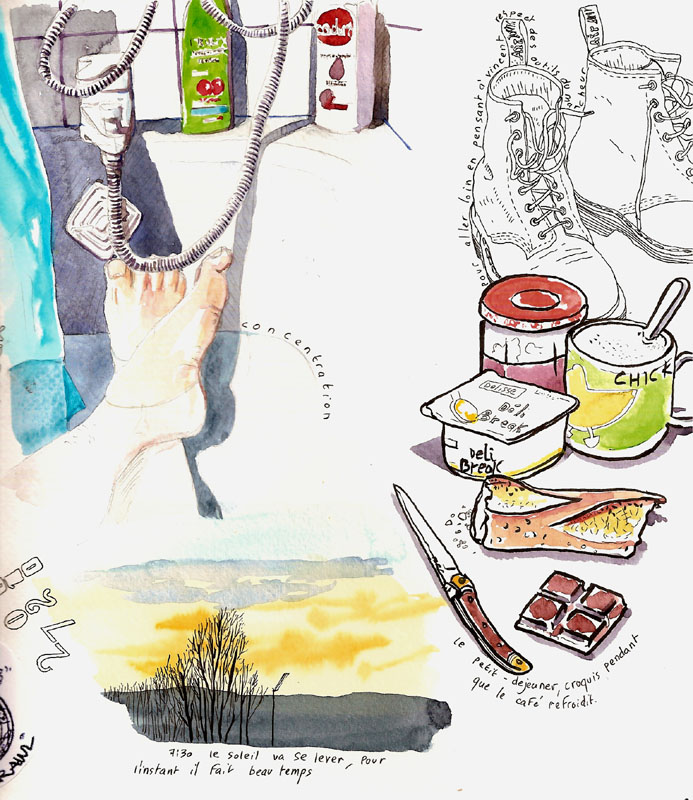 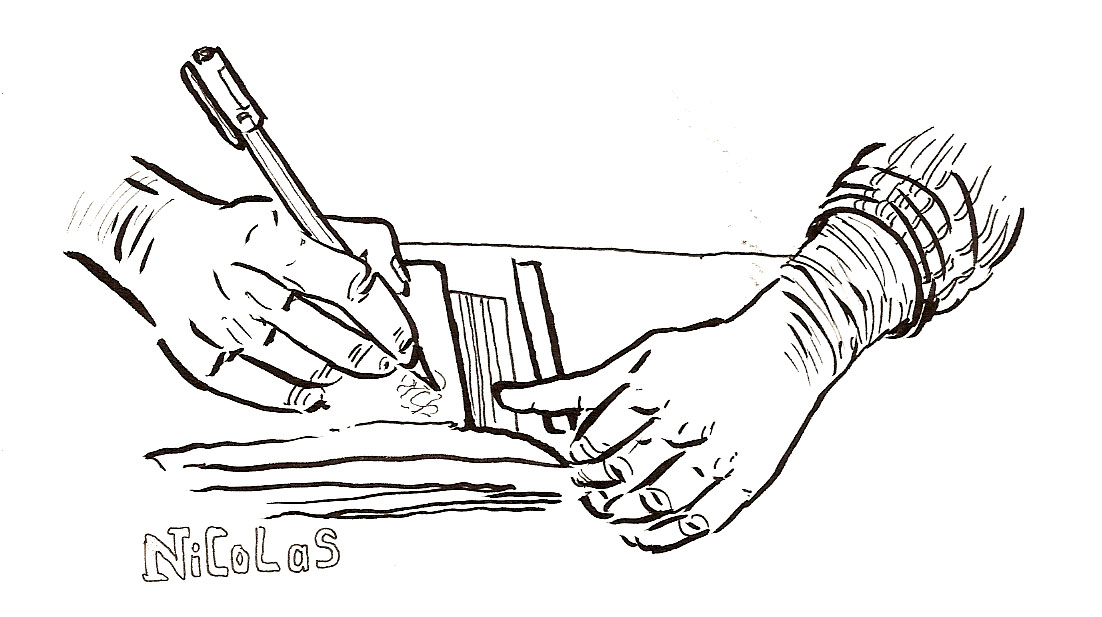 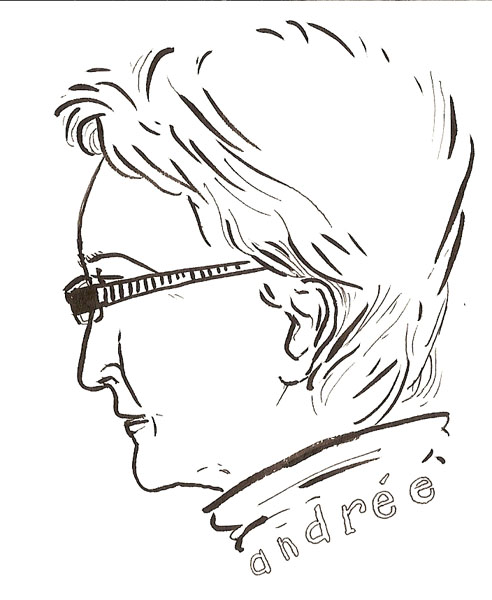 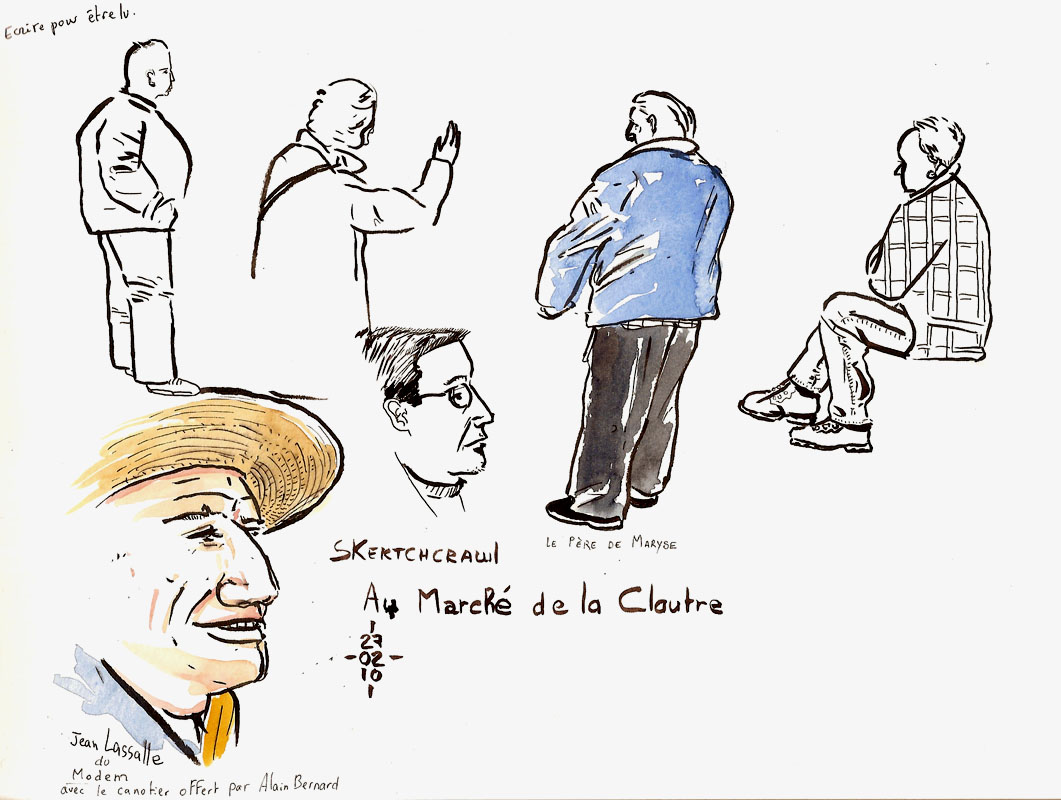 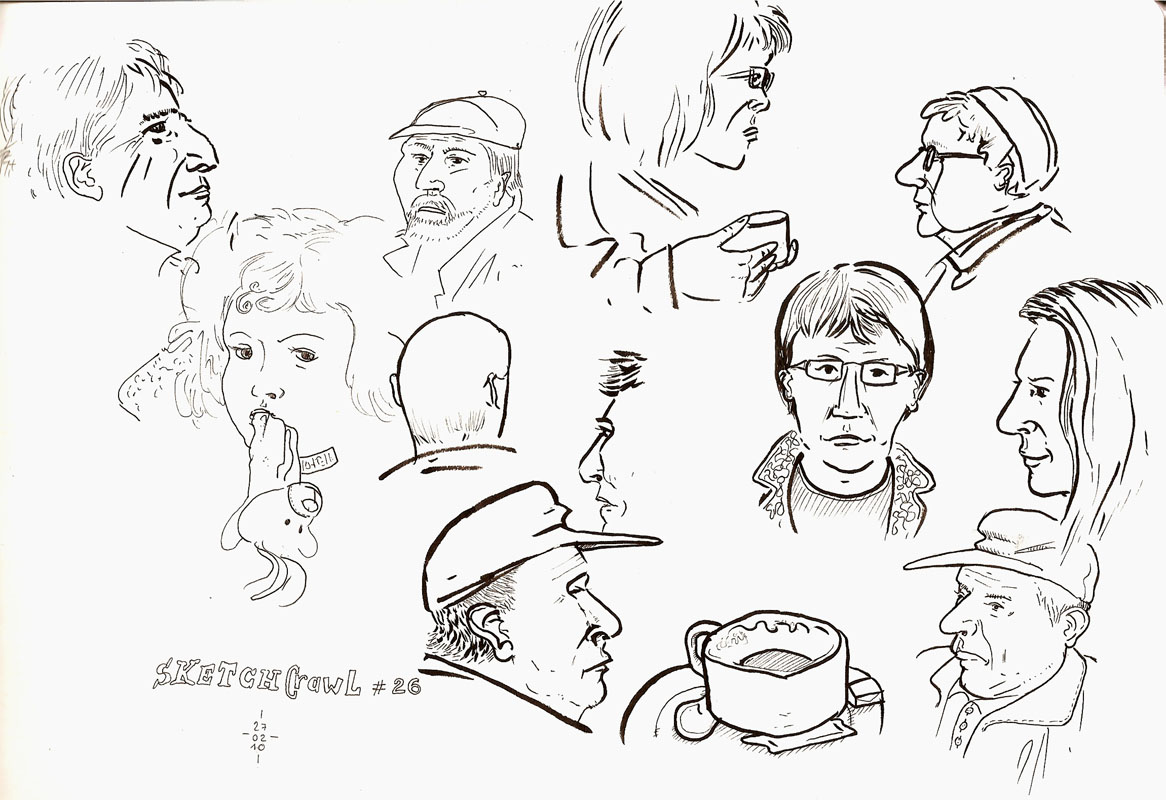 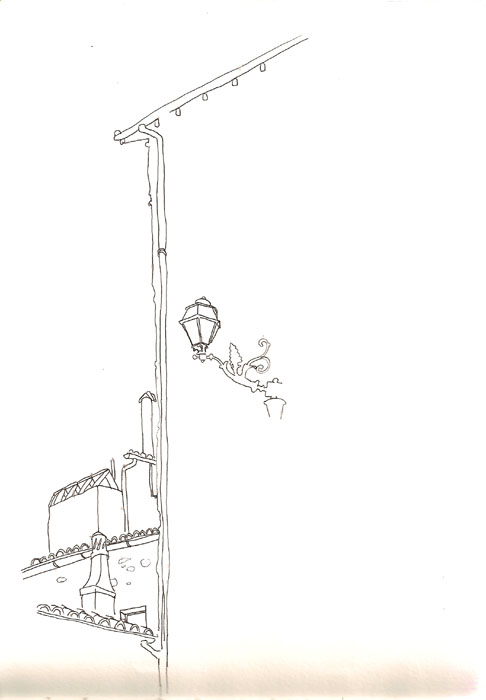 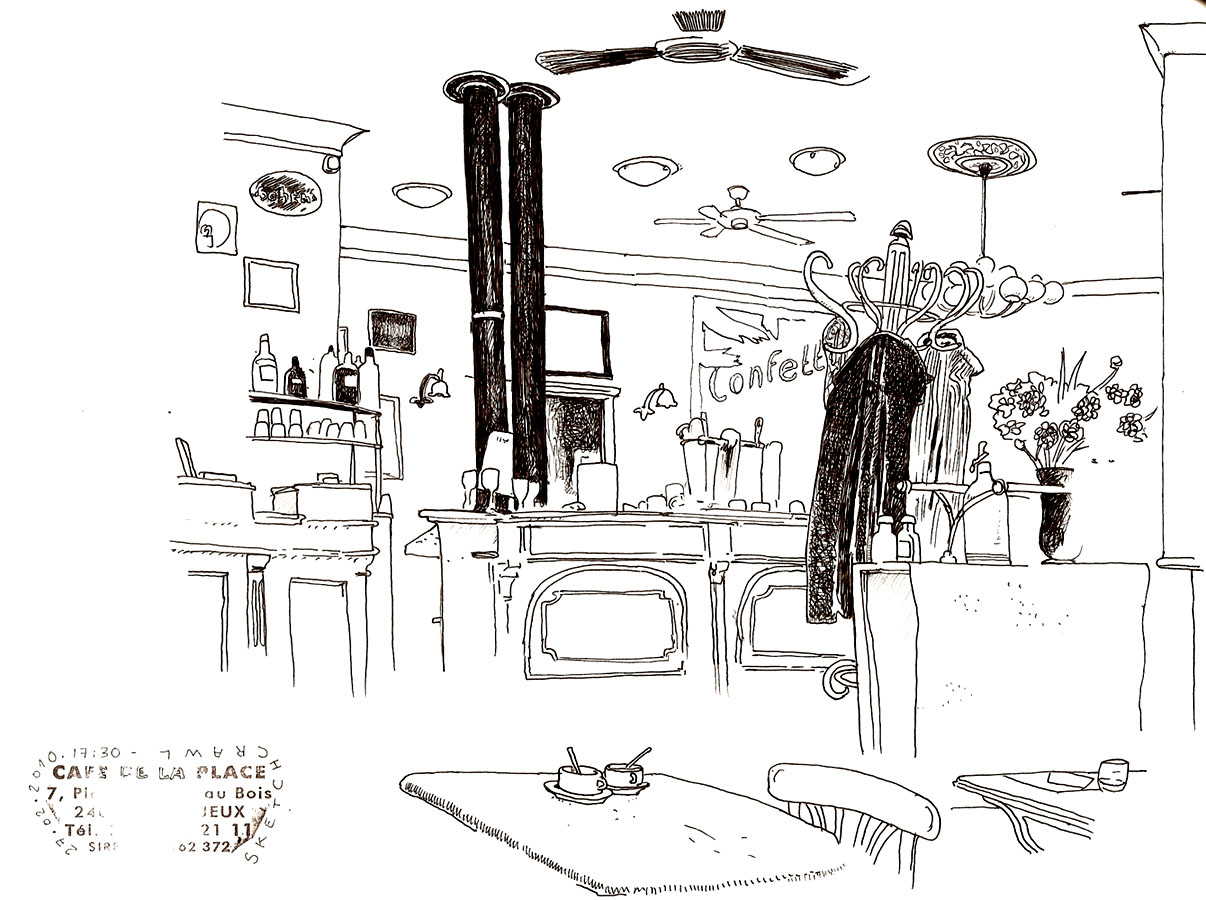 The one with the tub is kinda funny

I use the same shampoo (the green one)

Thanks for your comment in my "result", that was very nice

Great job for all.

lovely to see lots of drawings by everyone. Thanks for the photos too- It is always interesting to see sketchcrawlers at play. It would be interesting to hear/read your interviews with the journalists. You were certainly in demand.

The architecture of the town looks nice and old. I like the whole day sketchcrawl as well - from bath to bar
Top

Thank you all. We had a few article in the local press, if you can read french.

These are lovely! Pascal, I love the variation in the thickness of your lines. And what a neat way to document your day!

Pascal how can you draw in the bath??? I would end up with a soggy sketchbook. Great drawing!
My site: http://www.suepownallartist.co.uk/
Please like my facebook art page: http://www.facebook.com/SuePownallArtist
Top

So many wonderful sketches!!! Thank you for sharing the sketches and the photos!
Top
Locked
17 posts