It's that time again! Sketchcrawl time. On Saturday we are planning on sketching in and around the Kings building on Devon Street in New Plymouth, New Zealand.

We will be meeting at 11.00am and sketching outside. We have the opportunity to sketch inside upstairs from 11.30am. this will give different views of the streets from the windows and we are hoping that some of the original features are still intact inside as well.

If you want to join us, contact us at:

Here is a little bit of history about the building:

See you all Saturday,
Jacquie.
Last edited by jackie.flynn on Sun Oct 25, 2015 6:39 am, edited 1 time in total.
Jacquie.
A member of The Taranaki Sketchers and the Urban Sketchers Flickr Group.

The King's Building took two years to construct and was opened in November 1927. It was built for Newton King Limited, an important local businessman and benefactor. A building permit was issued on the 24th of March 1926 for the King's Building, Jones and Sandford were the builders at an estimated cost of £53,000. The architect firm involved was Gummer and Ford. They are described in the NPDC Heritage Study report as the pre-eminent architectural practice in New Zealand during the inter-war years.

In 1994 a penthouse apartment was added to the roof of the building and the whole building was renovated, modified and upgraded to give quality retail, office and residential use.

In 2010 the whole building was repainted in sympathetic colours which highlighted the decorated panels and friezes.

We had the opportunity today to sketch in the penthouse apartment as it is currently empty. This gave us different views of the central business district and the foreshore. We sketched both inside and out, and were able to come and go as we pleased. 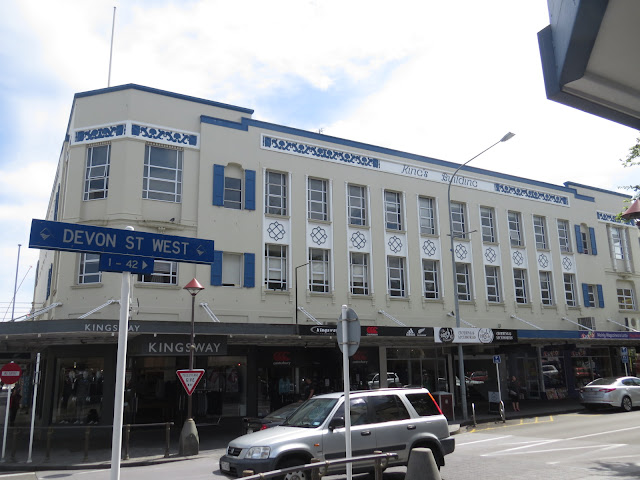 I managed 1 1/2 sketches on the day. Here is my second sketch: 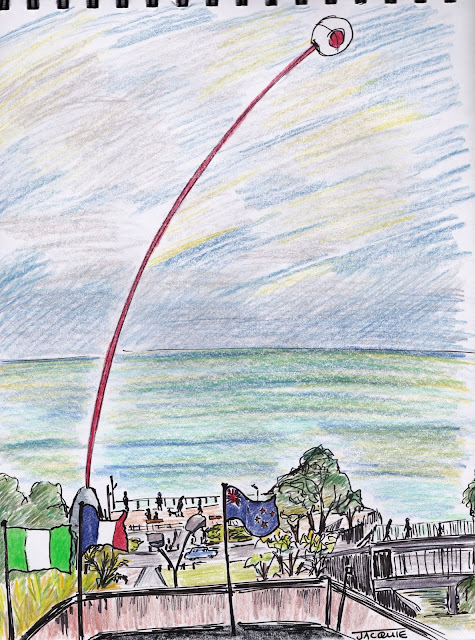 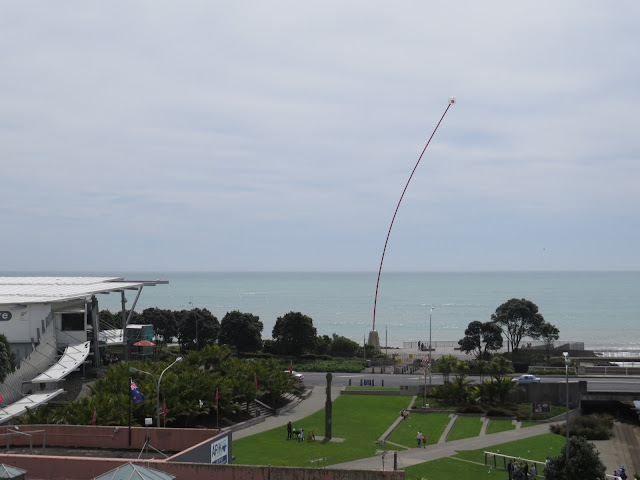 Here is Maurice's Post:
The Kings Building is a landmark in the New Plymouth CBD. It houses retail shops, upstairs commercial offices and a Penthouse which has a wonderful view of the New Plymouth waterfront. An interesting feature is that it is built over a stream . The downstairs premises were subject to occasional flooding before a flood protection scheme was constructed . The eastern end of the Kings Building includes the Espresso Cafe which now looks over the Huatoki Plaza and uncovered part of the Huatoki stream. MLB . 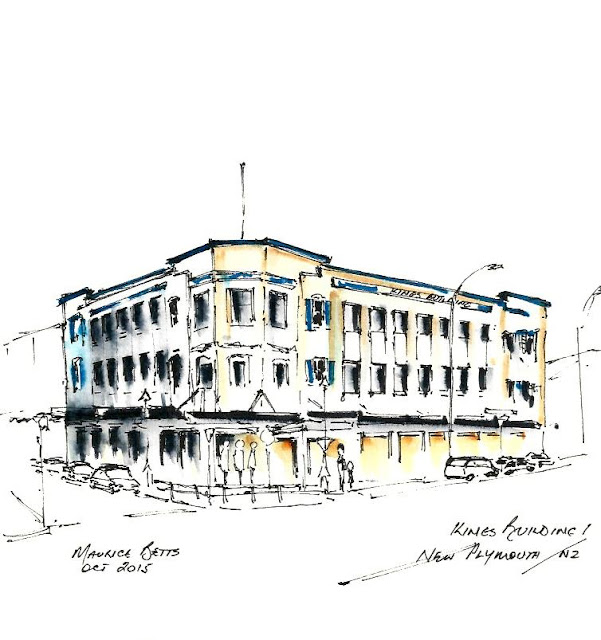 Here is my second sketch of the King's Building from across the road on Devon Street East.

Here is a picture of some of us taking in the view from the roof terrace: 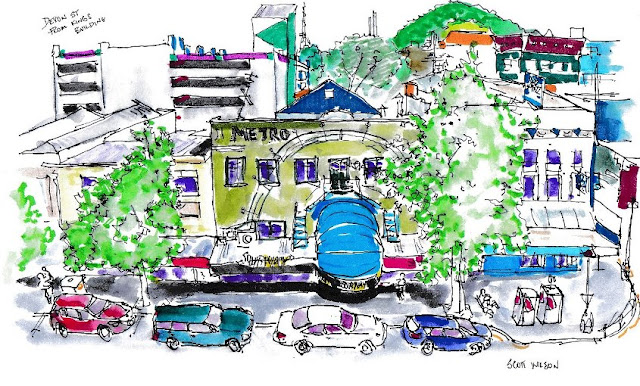 Often the views from high places in a city, can show untidy rooftops, and ours was no exception. But here an there were handsome pocket cameos. When Brian and I peered over the rooftop barrier at our main street, Devon St, we were presented with a wonderfully colourful left and right view up and down the street.

We stood there, clutching our sketchbooks firmly on the edge and enjoyed drawing in the warm spring day.
http://taranakisketchers.blogspot.co.nz/
Top

I like the idea of sketching the view from above. Nice work everyone! Thanks for sharing your work.
Top

Thanks to show us the place right under our feet on the other side of the globe! Very nice sketches indeed.

Here are a couple of photos's of Scott and Brian on the roof of the King's Building to give some perspective: 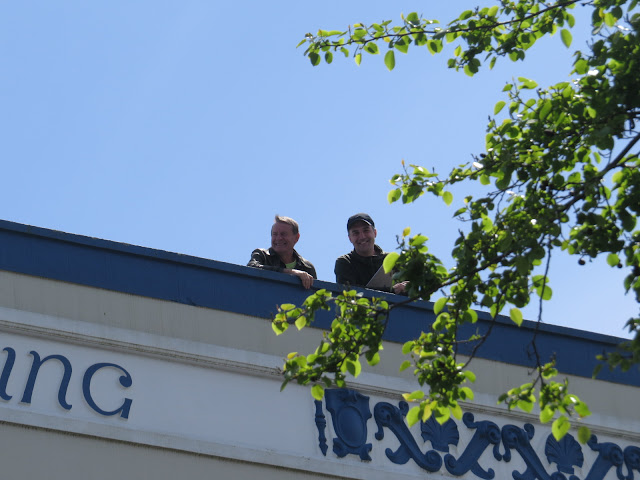 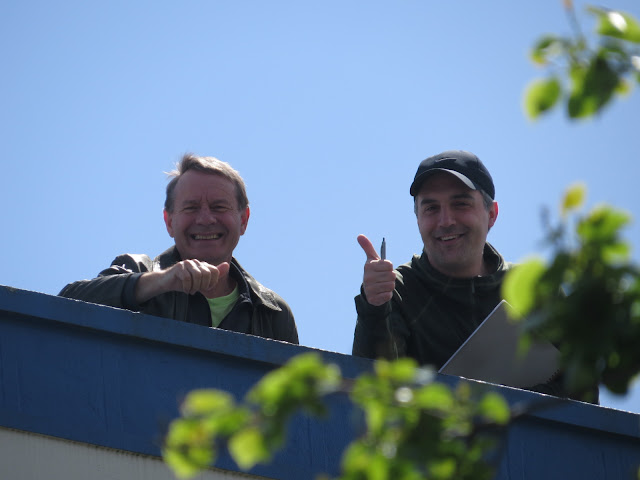 And this is their view: 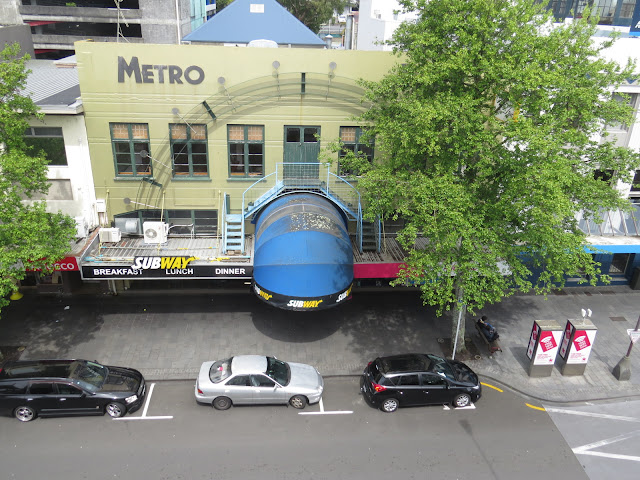 Here are two more sketches by another member of our group. 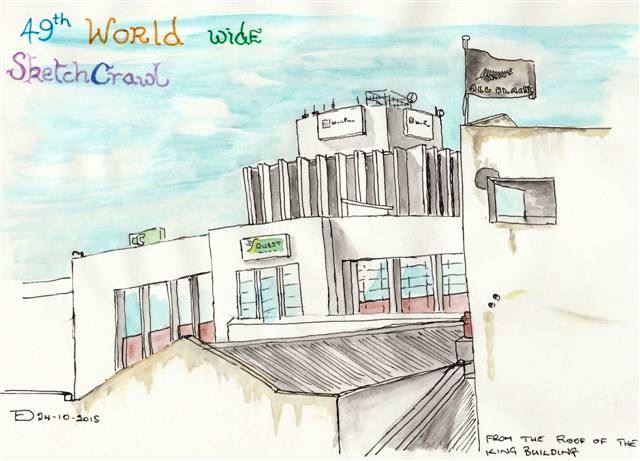 King Street from the Kings Building by Mary 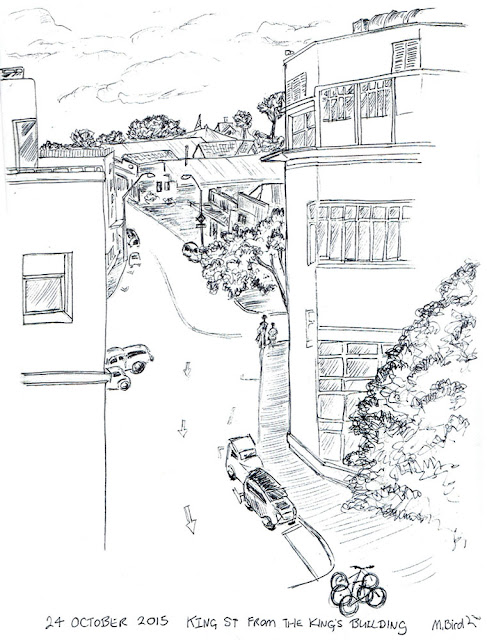 You found superb location, so enjoyed the view through your sketches

Here is another sketch by Trevor: 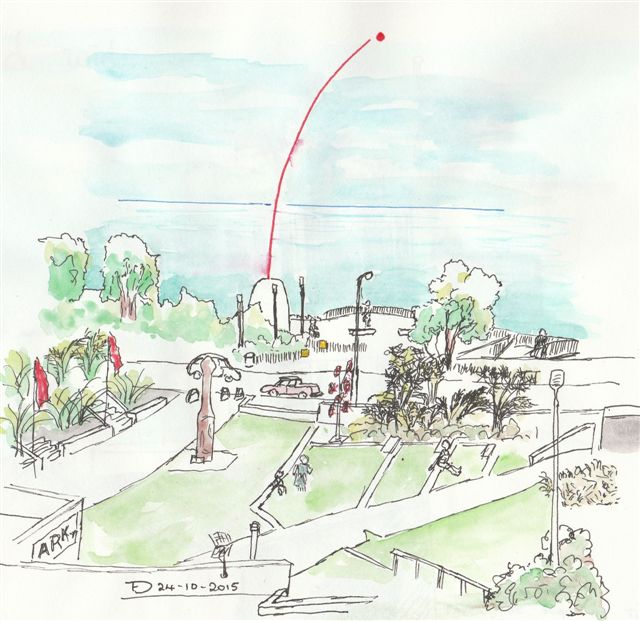 Here are a few pictures of us out sketching on the day: 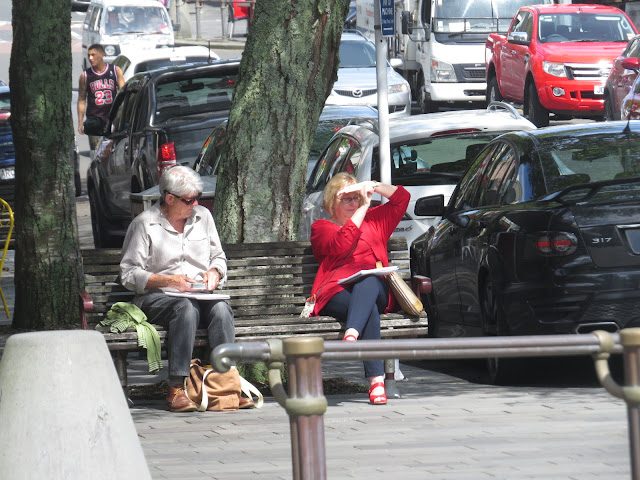 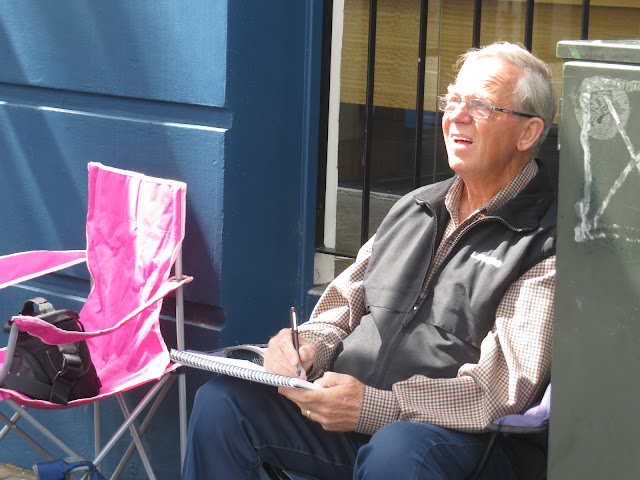 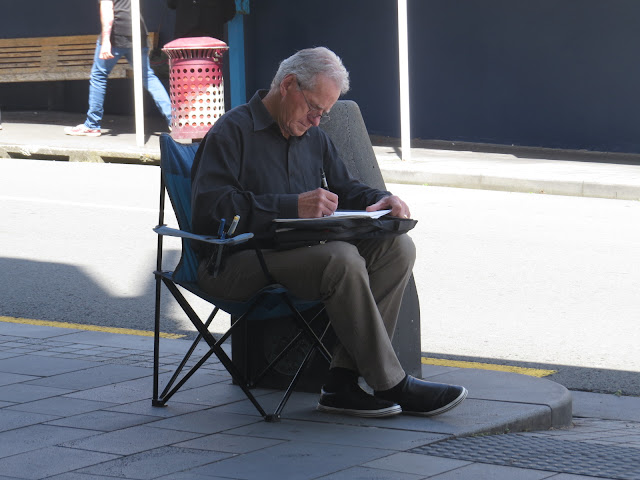 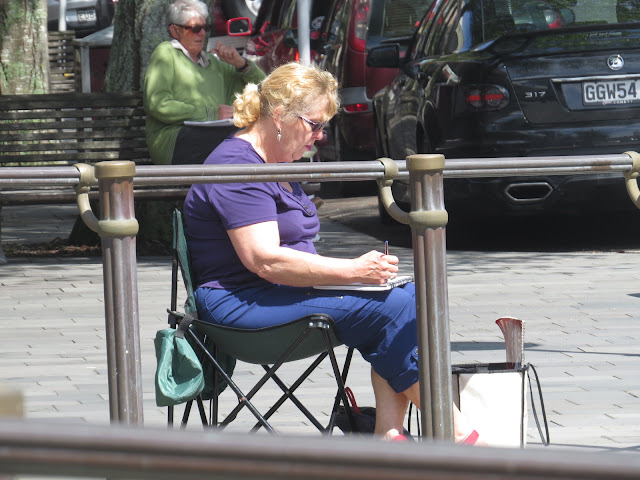 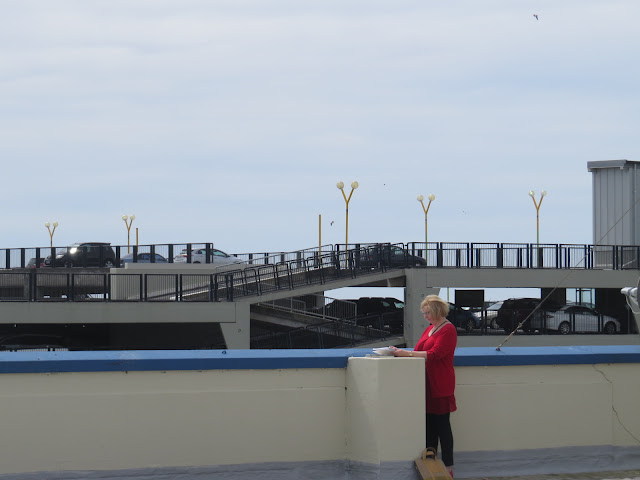 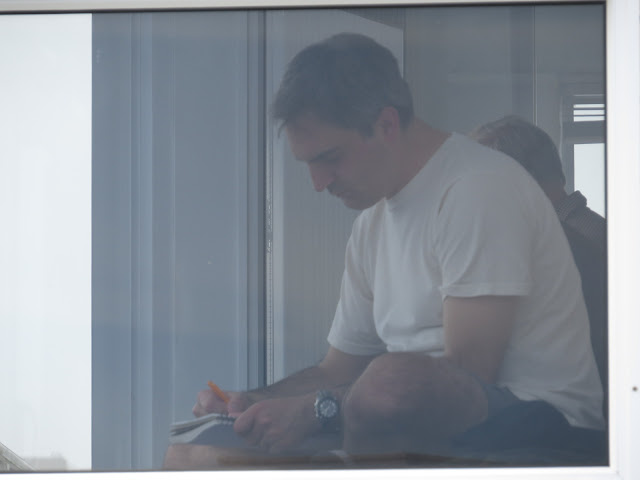 Some of the results at the end of the day: 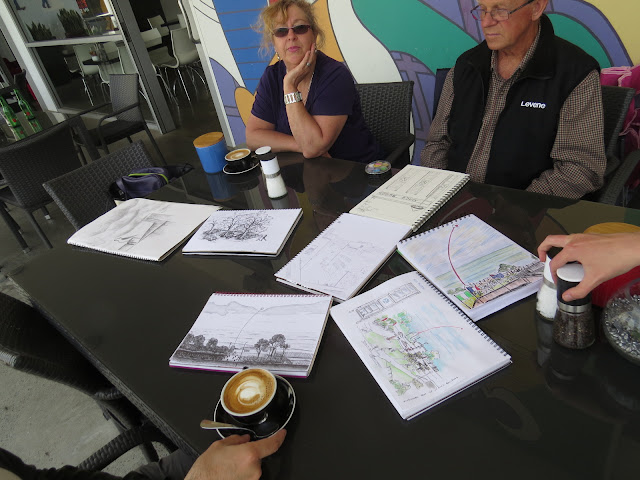 Thanks to show us the place right under our feet on the other side of the globe! Very nice sketches indeed.
จีคลับดาวน์โหลด
Top

Thank you. We had a lovely day. It was one of our best locations so far.