This is the thread to use for POSTING photo's and sketches from Vancouver, Canada Sketchcrawl #33

For those looking for location, time and meeting info use the original thread at viewtopic.php?f=58&t=6910

Today I started early at 8:00am, trying to get some of the background sketched before all the tourists arrived. Brrrrr! it was cold especially in the shade and I had to sacrifice using my sweater on the bench to keep my bum from getting too damp. However, it was a nice sunny day and it did start to warm up a bit. I did not see anyone else sketching, I was at the meeting point at 10:00am and for half hour each side of that time. I did however; feel a little ill and did go inside a couple of times to get warm.

Starting early did pay off.. there is a lot of activity in the early morning before the market opens and the tourists flock in. The activity comes in the way of all sorts of delivery trucks and the market vendors setting up for the day.

I had a lot of interested on-lookers watching over my shoulder and asking questions.
My Photo's of the sketches are ot so good with this cheap camera. The original sketches are not too bad. I really need to get my scanner fixed

The first sketch was from Triangle Plaza looking onto the front of the Granville Island Public Market. 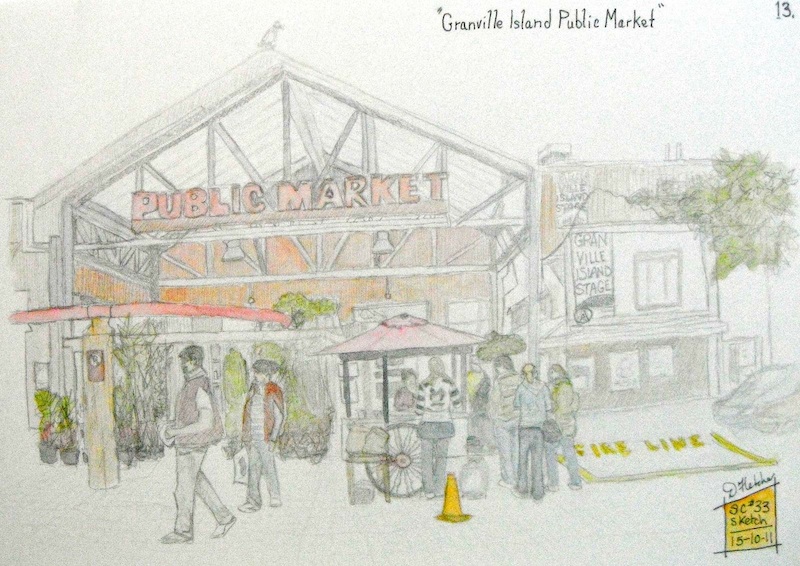 The second sketch was of the Produce Delivery truck, also in front of the Public Market. 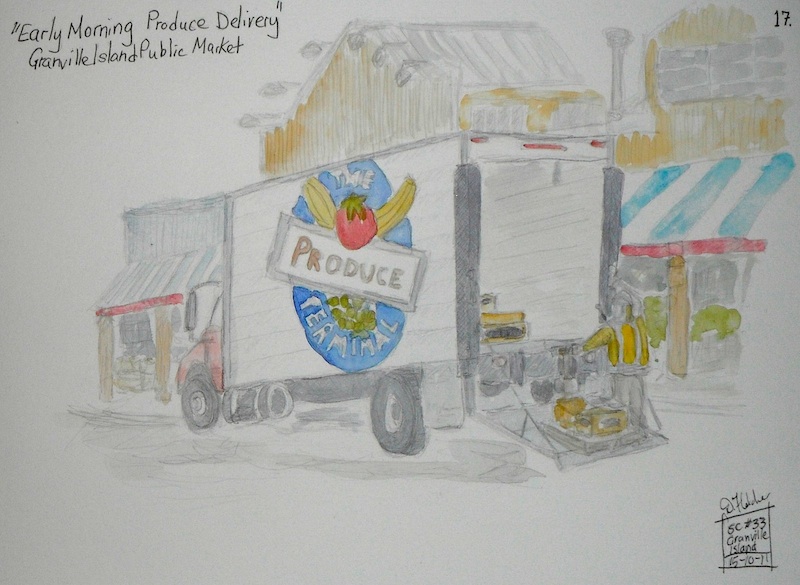 Third sketch was done from the dock behind the Public Market. This was a rough sketch of a couple of kids chasing the seagulls. 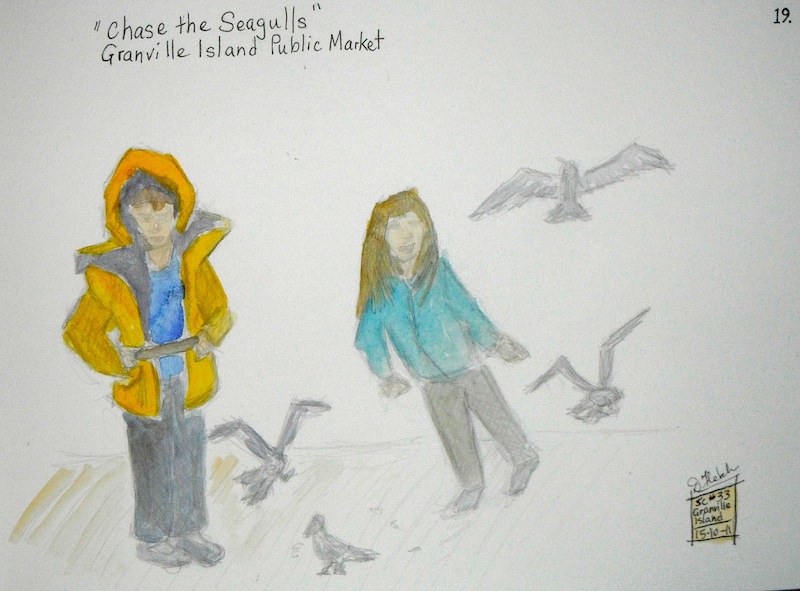 I started a sketch of inside the market, but was feeling ill so came home. I will finish it at home and upload it later when I am feeling better.

Very nice, keep it on! Vancouver needs of more sketching artists!
I hope you'll set up well in the new town. I actually got to know very nice people to sketch with over there, let me know if you need to be hooked up

Hi CyberDave,
Sorry to hear you weren't well for your sketchcrawl.

Great stuff you managed as many sketches as you did! I like your first sketch of the market the best. Great idea to get the background laid down first! I think I need to be more organised with mine.
Hope you feel better soon.
Jacquie.
A member of The Taranaki Sketchers and the Urban Sketchers Flickr Group.

Great results. I esp. love the details in the first one of the market but all are cool. I hope you are feeling better by now.
Top

Thank for the kind words eyes, Jackie, Morrys. I only wish I could have done a better job with photographing the pencil sketches. The originals are much more better than the photo's. I really get into detailed pencil sketches and have now learned to work very quickly, but I must confess I should also do quicker and looser sketches.

Yes eyes/Jackie/Morrys thanks for your concern but I feel much better today after having a good sleep.

I enjoyed doing the front of the market and this was my planned sketch. Getting out early and doing the building before the crowds turned up was good, then added the mobile features and people on top as they arrived. The girl with the stand out front got a kick out of the sketch when I showed her (as she had seen me sketching and wondered what was in it).
I actually had a lot of fun doing the delivery truck as it was not there very long and I knew it could leave at any moment. I had to work very fast pushing myself. This was totally unplanned as a sketch. I did note that there is a lot of fun activity down at the market in the early morning, but just different activity than later when the customers arrive. Good to know is that although the actual market stalls are not open until 10:00am, the washrooms and the coffee places are open very early to serve the vendors and delivery folk.

The kids just would not keep still in the "Chasing the seagulls" but that was part of the challenge. The little girl looks a little strange in the sketch, as if flying; but that is how she really was. She was leaping all over chasing the poor birds. Why to kids have so much fun terrorizing the birds? A few minutes after I had done the kids sketch a hawk arrived for his "lunch". Masses of pidgeons and seagulls took off in a flock and the hawk went on the hunt. The result was the hawk sitting in a tree having a very satisfying meal. Gulp

and these people seemed both impressed and encouraged. Many of them had kids with them that had painted in watercolour and it was often the kids that were fascinated. That made me feel good.

The parents went off promising to encourage their kids to continue.

When I first started to do plein air sketches I was absolutely terrified and could feel the eyes drilling into the back of my head. Now, it does not bother me. I still have the little hairs on the back of my neck stand up when I get a crowd standing behind me, but I am comfortable with them being there, and I do not mind answering questions while I continue to sketch.

After starting at 8:00am in the cold damp I was not feeling very well by 1:30 in the afternoon.

I had already done three pencil and watercolour sketches. To get warm I had gone inside the market to do one last sketch. Unlike the other sketch locations, there was nowhere to sit and so I changed my sketch style to suit the situation. I had to work quickly and therefore decided to use a Pilot drawing pen instead of pencil. The sketch led itself to a splash of simple watercolours. I did not get completely finished before I felt so ill I had to leave around 2:15pm. The sketch was finished after being home for a while and resting up, but I did not make many changes. With a clearer head, the delay in finishing allowed me to consider the sketch and allowed me to make the decision not to colour all the scene. I think this was the correct decision. 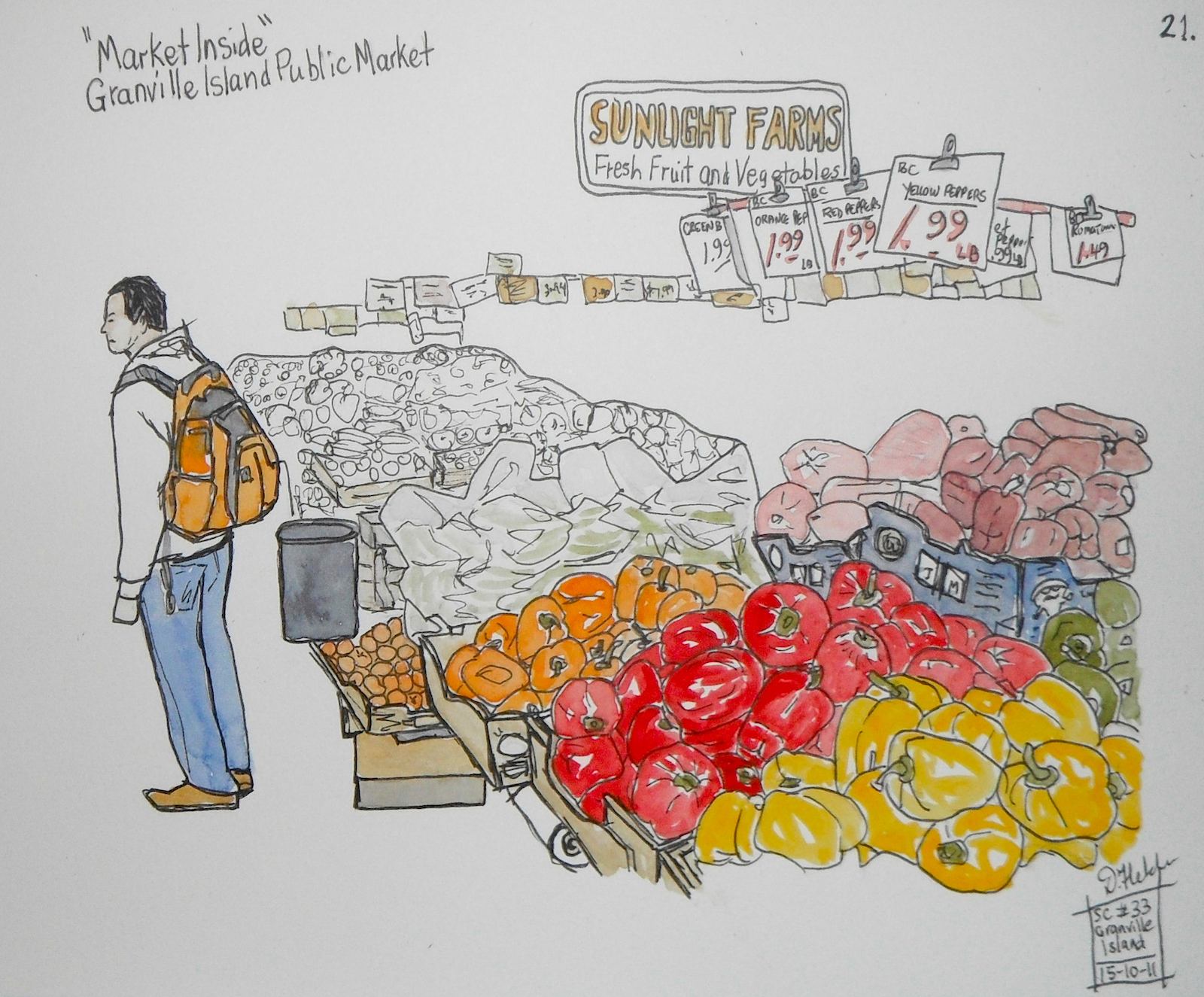 Hey Dave!
Happy that you feel better to-day!
You made a great job yesterday! I am impressed by the way you know how to figure people and atmosphere. My favorite is the last one: the composition is great, with the vegetables in front and a part without color.

Photo's from my Sketchcrawl#33 trip to Granville Island Public Market.
Sorry no picture of sketchers, I was solo as far as I know.

Miss Pied Piper#1 and #2 - Little girl was very popular with the all the birds (pidgeons, seagulls and sparrows) as she dragged a bad of bird feed around the dock area behind the market. 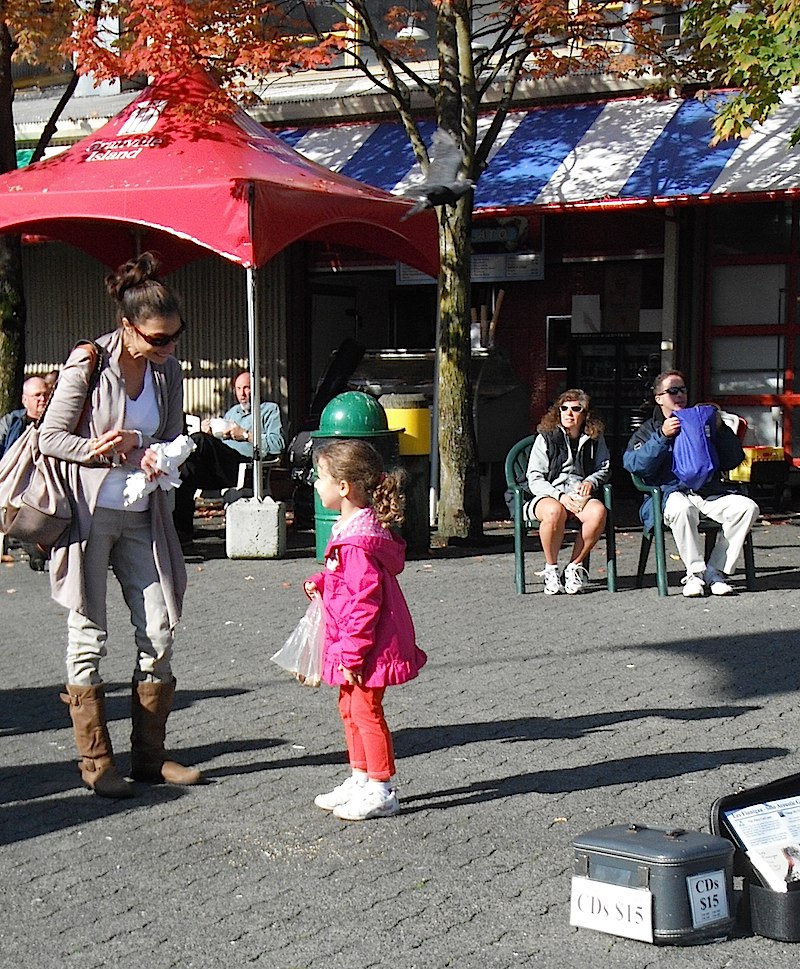 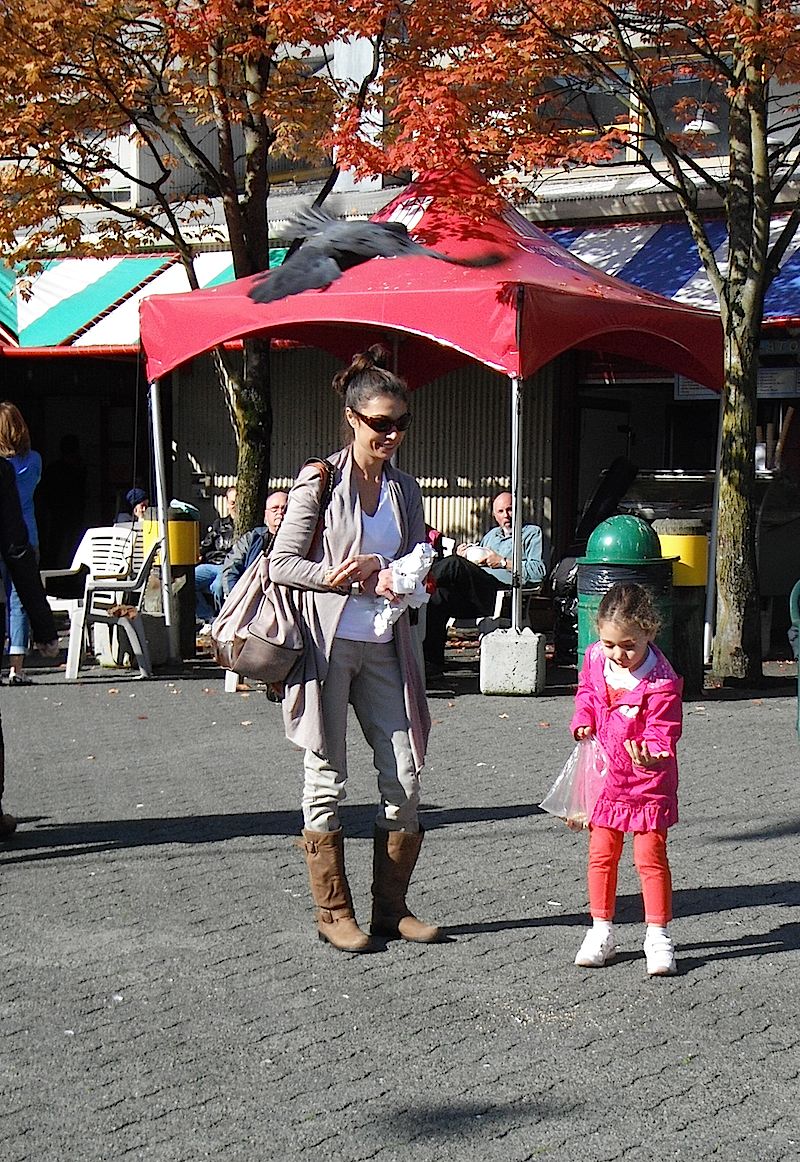 Kids and Pidgeons - Kids fascinated by the masses of pidgeons on the dock behind the Granville Island Public Market. See the False Creek skyline in the background. 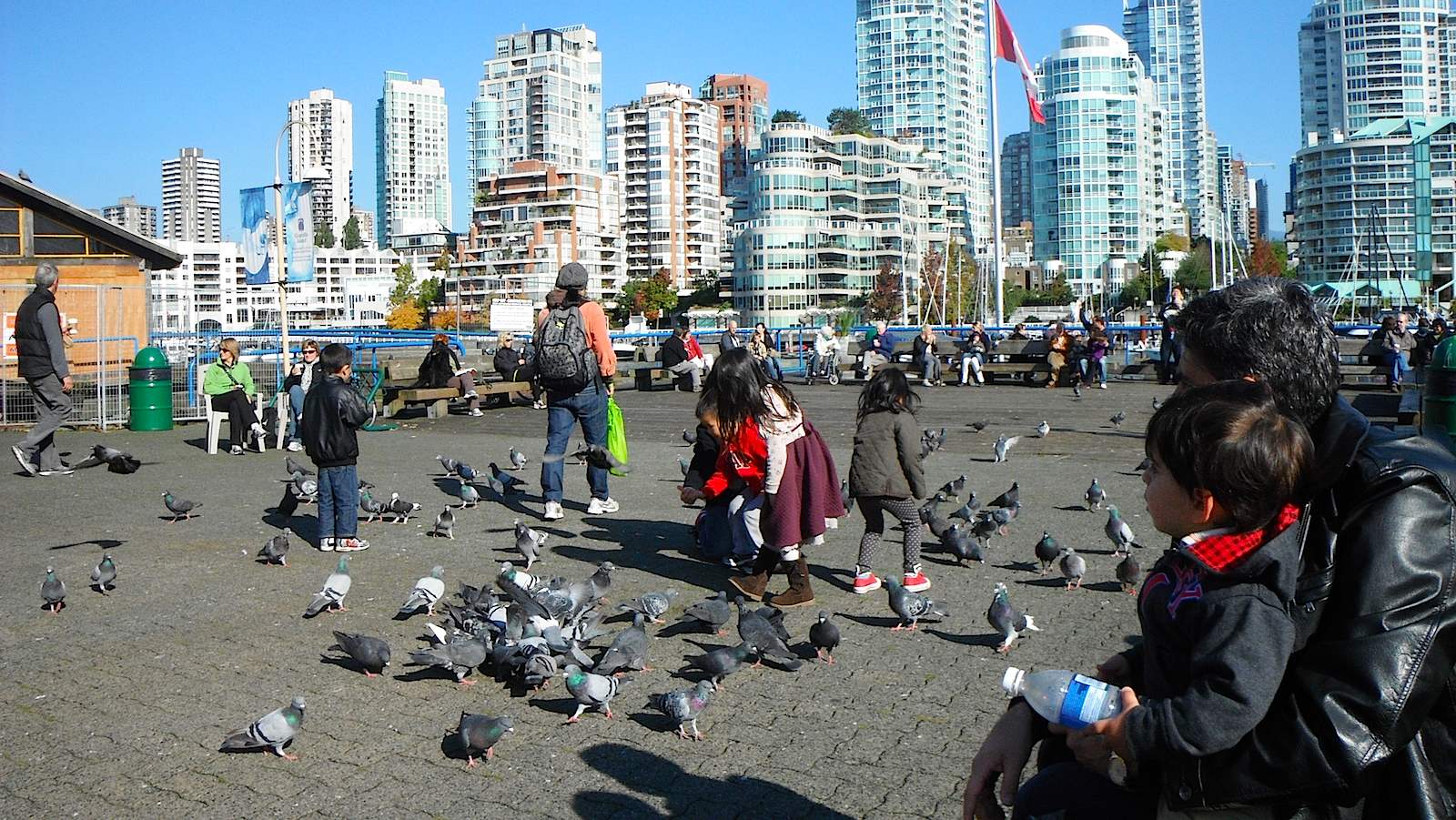 Girls and Pidgeons - three young ladies feeding the pidgeons right in her hand. Les Finnigan (busker) in the foreground providing the musical entertainment. 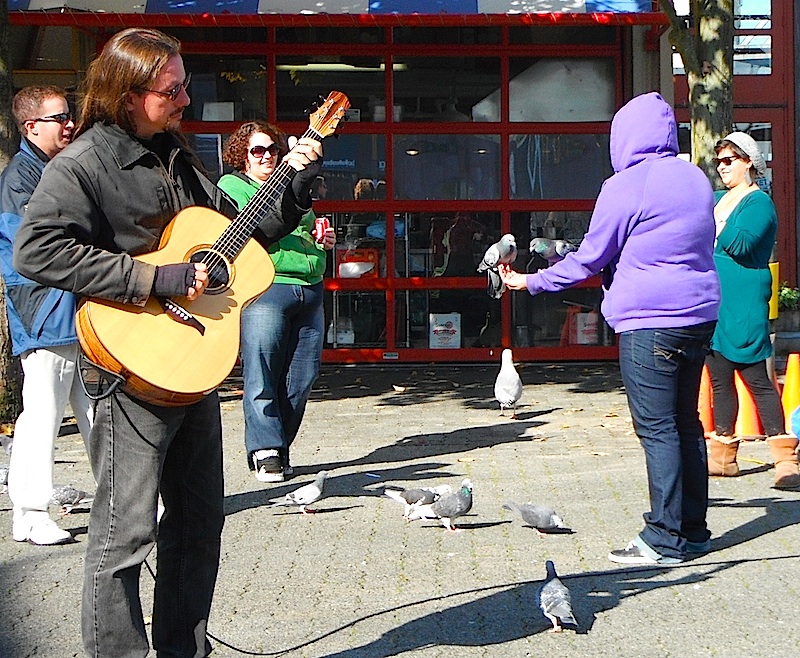 Les Finnigan #1 - Solo Acoustic Guitar player busks behind the market. I felt sorry for him trying to play while the kids were running past, the pidgeons kept taking off in flocks around him and the kids dripped ice cream into his open guitar case. There is a constant stream of buskers performing in this spot. As I understand it they pay for a 3 hour time slot. There is also another busker spot in the "Triangle" in front of the market. 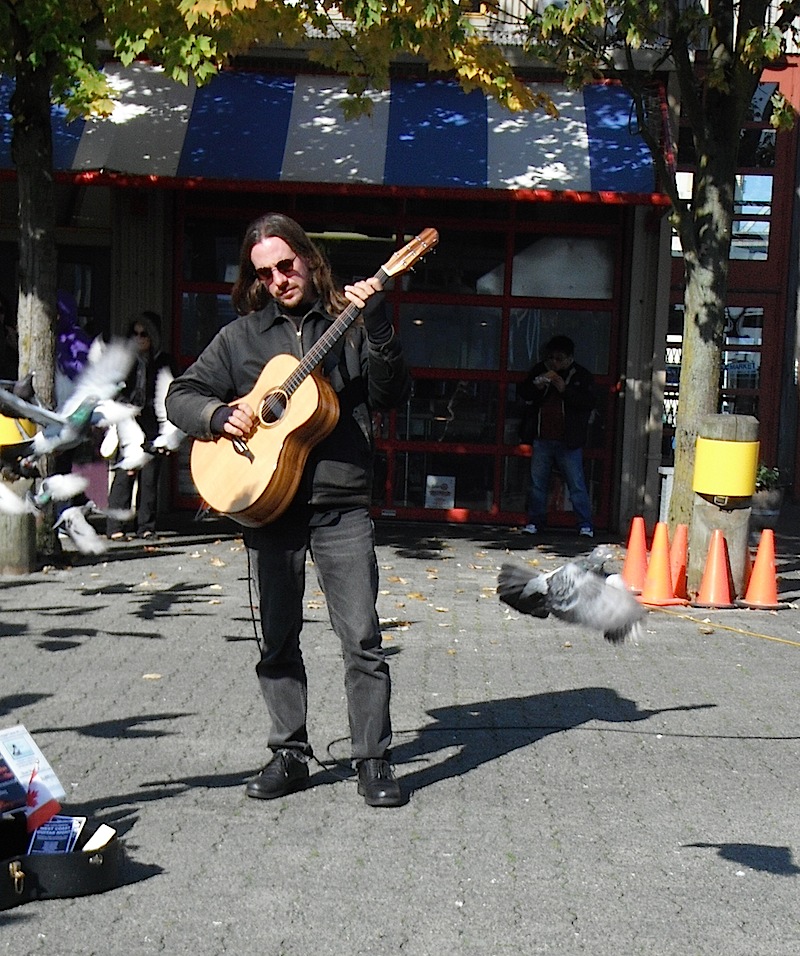 Les Finnigan #2 - Les performs while you can see the gradual build up of pidgeons and gulls, with little miss Pied Piper loading up with bird feed.

Looked like an awesome day. (maybe a bit cold but not too wet) I should really come into town one day and sketch with you. I'll try to time it with a sketchcrawl.
Good choice only colouring the foreground. (the peppers) It seems to help keep the 'back' in background.
My website: briangnyp.com!
Top

Hi Dave! Love your sketches.You have such a delicate touch to your work. I enjoyed the photos, too. I'm going to put some of mine up later. Looks like you had a good day, too. It was beautiful in Virginia. Thanks for your message--you're right. There is a lot of great architecture in Fredericksburg. We've got a lot of buildings from the 1700s. Yesterday we stayed just across the street from the coffee shop and sketched the backs of buildings all morning. I hope the other folks will upload their sketches. This site is not the most user friendly and I'm afraid some of them might have trouble.
Anyway, thanks for sharing. Great job!
Raudy
Top

It's been a while since the last time I joined the Crawl. Lead by instinct and a tip, I ended up going solo(solo-crawl?) to a place in North Vancouver(Maplewood Farm) to sketch animals. It is a wonderful location if anyone is interested in drawing animal within the city.(can be reached by public transit) They have two beautiful drafting horses, which I stalked blatantly through out the entire day...(I hope they don't mind.

) Here are couple of the sketches from the visit. 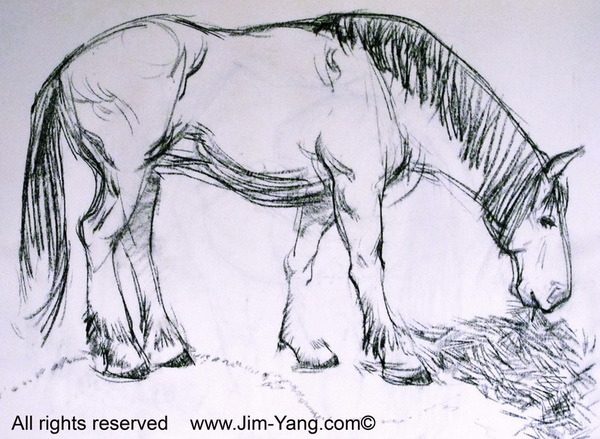 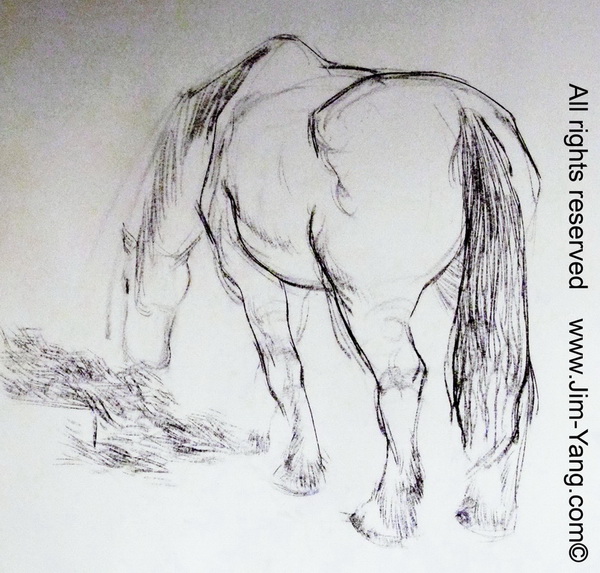 Great to see your sketches looks like you had a good day too.
You draw horses very well. I enjoyed seeing these very much.
I have wanted to sketch the horses in Stanley Park and the Police mounted patrol that comes around my building after going through the park, I just have not got around to it. But horses are definitely on my list.

Hope we can meet up for the next crawl..I assume January??? ora mini-crawl before then.

Wow, full of lively sketches and beautiful photos in your sketchcrawl!
Love all drawings, and the horse one. Thank you for sharing!

So nostalgic, Grandville island was where I did my first sketchcrawl, and I got to know lots of people that time!

Hello stranger, Now it's easier to find your post with the BIG GREEN LETTERS on the heading