by granny c
I thought I had this figured out and was typing away, when my cat jumped up on my computer. The on/off button is on the top, so he shut off my computer and I guess I lost all that I had done!

Hope this works. I'm still trying to make this new computer do things that I had learned to do on the old one! I can't seem to minimize a site like Flickr while I work on another one, lilke this one. I'm having the same problem in doing my blog and sending it to my group! Flickr seems to have disappeared again, although I had them both working before the cat turned off the computer!
The coffee shop at the LaSalle Hotel, where I had asked people to meet previously, is, sadly, being remodeled. (It was great like it was, but a new company is managing it and they just had to change things! I fear what they will do to it as they are not from this area. It's an old hotel that was great from the restoration it just underwent a few years ago.)
I decided that the downtown library would be a good place for all ages to meet. I asked people, it it was warm, to meet at the old fire bell on the grounds of the Clara Mounce Library, recently renamed for the longtime librarian as she retired. It was cold and windy, so I just took a few photos around the grounds, then went inside. No one else showed up, so I did the Crawl solo.

The library turned out to be a great place to work. Warm, comfortable, fairly quiet, safe, and close to water and restrooms! I picked a table near a window, thinking I would draw the backs of some of the buildings. But, I looked at all those windows and decided it would take too long to draw those. I had a photo, if I decided I wanted to draw that later. I started out making a title page for my new 7" x 10" sketchbook, while I thought about what I wanted to sketch.

The flags were flapping in the north wind, the sky was blue, the Crepe Myrtles were bare, there were colorful pansies planted beside the library, and the building had sun on it. It doesn't look a lot like the building, but it is colorful!

From my table, I watched people come and go, working on computers, making copies, asking questions at the Reference Desk. There seemed to be a lot of people working on comuters and I wondered what happened to the microfiche machine that used to be where the copy machine is. Of course, as I started to draw people, they often either moved or left! This is my sketch of some of the morning activity in the library.

My daughter and grandson picked me up at lunch time and we went to the Longhorn Tavern for lunch. That looked pretty "Texan", to me! (Of course, the Longhorns are our Aggie rivals.) However, this restaurant was located by the old auction barn, on a major highway north of town, so the connection is to cattle, not sports. Last summer, the old place was torn down and the restaurant moved downtown in the old Coca Cola bottling plant. It's an interesting place filled with collectables and old photos. They give huge servings of delicious food, cooked the way it should be.


After lunch, I returned to the library to sketch some more. I did some quick sketches of people as they moved around in the library.

This young boy and girl sat across from me, involved in their books and small computer. I thought they might be brother and sister, and were taking advantage of a cold afternoon to learn. An older boy sat behind them and worked on a computer. When the older boy left, they all left, just as I started to draw the girl.

I had planned to go upstairs in the childrens department to draw the wonderful dollhouse that they have there, and the grandfather clocks. But, they closed earlier than I thought. At 5:00 instead of at 9:00. So, I left, thinking that I can go back and draw those items another day. I was so relieved a few years ago, to learn that the dollhouse,clocks, paintings, and almost all of the books, etc. had survived arson. I interviewed the librarian who oversaw the restoration as they prepared to move back into the library. That interview is in a book on the history of Bryan. This library,and all of them, are very special places, to me.
I took a few moe photos, looking at light, shadows, and shapes, as I waited for my ride.

Looking forward to the next crawl, and still hoping that we can get a group.
I used a Pitt pen for drawing, this time. Added a touch of color with Winsor Newton watercolors in a travel set.
You can see my pictures on Flickr or on my website, http://cecelia-throughmyeyes.blogspot.com/ or on Brazos Valley Sketchers on Face Book, until I can figure out how to open Flickr and Sketch Crawl at the same time! 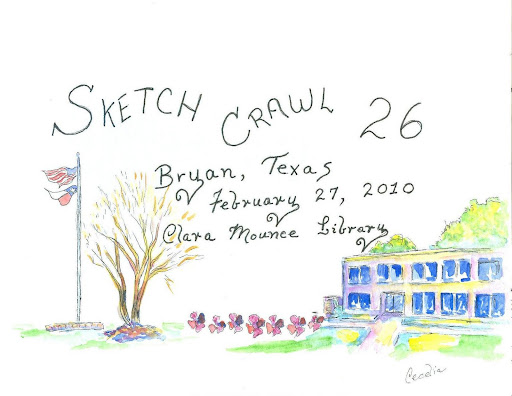 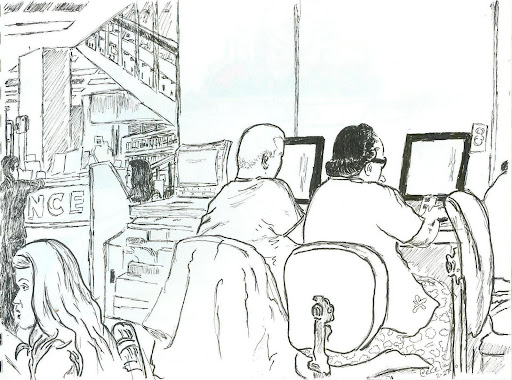 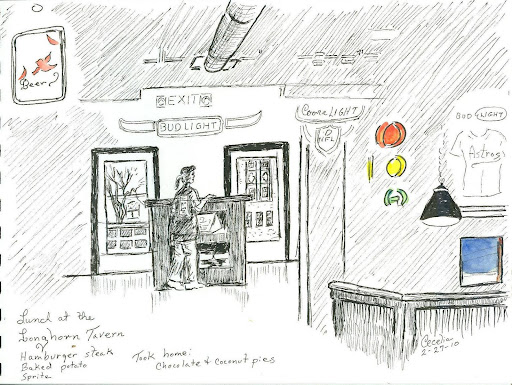 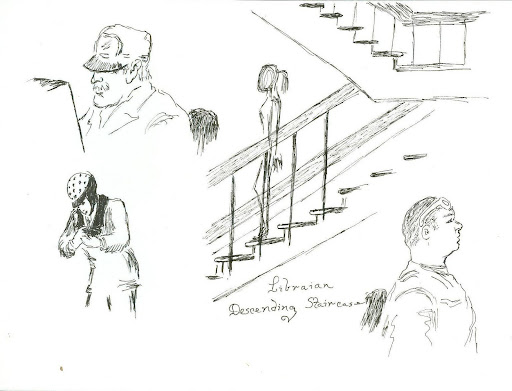 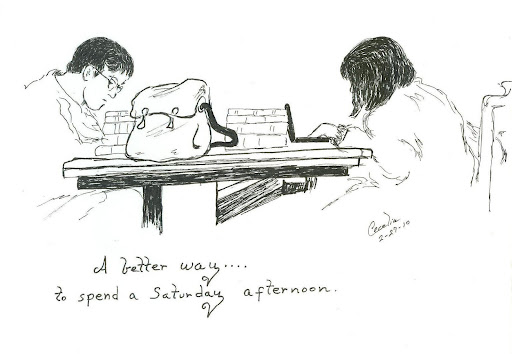