For the 22nd Sketchcrawl, the Barcelona Group ( Eclecticbox, Lapin, Monica and I ) met at the Christopher Columbus monument which is located at the end of Las Ramblas. The statue points out towards the port, while to his back the Tibidabo mountain traces out an interesting silhouette behind the city (thanks in part to the church that's situated right on top). After we had made our introductions we started sketching. We had only being drawing around 15 mins when it started to rain!!

Lapin had the great idea of going to the nearby World Trade Centre which gives a good view of the city and the port.

( this is looking back at the Columbus monument, one towards the IMAX cinema with the Torre Agbar in the background and another of the port).
When the rain stopped we made our way back to the Christopher Columbus monument.

( I tried to do some different views looking up at the statue but my neck wasn't too happy about that idea so I started drawing some clowns on stilts instead, that were entertaining people sitting outside a bar.)
Although the sun was out it was quite chilly with a breeze coming from the port. Monica already had a cold so she decided to call it a day. After a while, the rest of us went for something to eat and had a chat about drawing.

Stomachs filled with pasta, we crawled our way through the Barrio Gothico, stopping at the Plaza del Rey. While drawing, we could hear a guitarist playing commercial pop songs in the classical Spanish guitar style!!
( Eclecticbox sitting in the only corner that had some sunshine, an old rusted iron torch holder, some various sketches of people)
It was getting a bit cold by this time so Lapin had the idea of going for a coffee on the top floor of El Corte Ingles. The view of the city is amazing from there. I had never been before, so twice in one day I got to see the city from new viewpoints (thanks Lapin!)

Just after 6pm, it seemed like time to stop sketching. We decided to do portraits of each other, it was a bit like a gunfight in a western, sitting in silence with only the eyes moving. To finish off the day, Lapin had the idea to do some blind drawings of each other (drawing without looking at the paper).
(two blind drawings of Eclecticbox, two of Lapin and what was supposed to be a portrait of Lapin).

It was a great day in great company! (Get better soon Monica!)

We didn't hear from Yukino (hope you had a nice time in Barcelona, in spite of the weather).
http://dave-sketchblog.blogspot.com/
Top

wow - solid work ... I love the technique - I assume these are digital sketches?
http://brehmsketch.blogspot.com/
Top

I enjoyed the sketches and the report on the day too... in particular the western gunfight!

Thanks very much! I use a fine tip pen and marker that has a brush like tip for the tones . I usually carry lots of stuff and end up using the same two or three things as usual!!! I see other Crawlers take photos of the media they use, maybe we could do that in Barcelona next time.

Thanks! Yeah, it was a funny feeling sitting so silently in a crowded cafe, each one with a serious expression...staring...waiting! More so because I was drawing Lapin who was wearing a hat!

yesterday was my first participation to the sketchcrawl. and dave had describe perfectly this 22nd edition =;)
here most of my sketches, nice to compare our point of view at the end of the day. 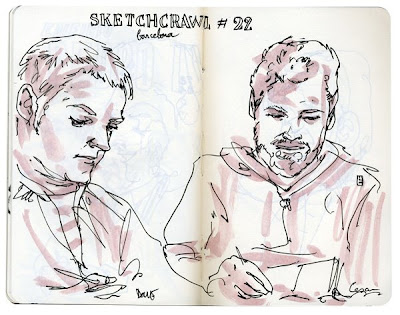 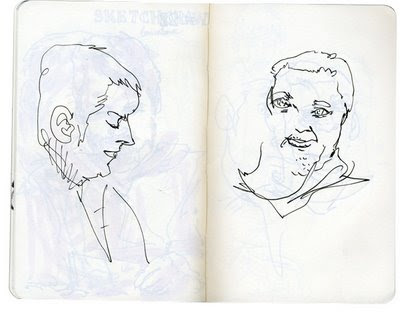 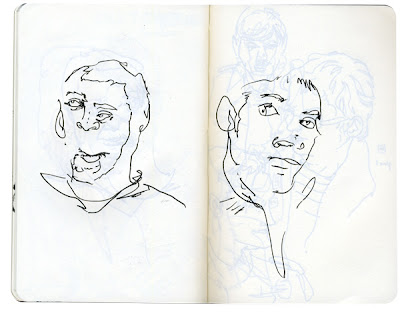 It was a real pleasure to meet all of you!!! For me it is an incredible experience to see other people having fun drawing, and it is incredible how different eyes can see different draws and perspectives. Sorry to leave you so soon, but...health problems, next time I will stay all the day long! or even more, if you want, I have a big house in Masnou, near of the port, and I would like to invite all of you to take a look of some places around to sketch and have some good spanish food in my house. There is a lovely road going up the hill of Alella, and I promise you that the views are just impresive.

Let me know if you are interested! Maybe we can organize a Private Sketch Crawl? I'm not working at the moment, so, if someone has sometime, I will be happy to guide you around.

Hi everybody!
After such a good description from Dave of our route, I hardly have much to add!!!
Even though I didn't have a good day for sketching I really enjoyed meeting again with Dave and the newcomers Monica and Lapin!!! So nice to see the group growing!!!
Here are my results for the day:
This one made while waiting for the other SketchCrawlers

I'm definitely not a landscape artists, so on the emptiness of people around World Trade Centre I sketched Lapin...

Back to Colon's monument I draw the head of the magnificent lions that surround it.

And my take on Colon's sculpture on the top of the monument.

A couple of tourists:

Unfortunately my try at blind portraying came out as incoherent doodling... drawing next to Dave & Lapin made me realise how much shall I keep practising to get clearer & more precise lines.
Hope to post some of the pictures I took later.
Looking forward for the next one already!!!
Last edited by eclecticbox on Mon Apr 13, 2009 5:01 pm, edited 2 times in total.
http://www.eclecticboxblog.blogspot.com
http://barcelonasketchcrawl.blogspot.com
http://www.google.com/reader/shared/eclecticbox
Top

I am your sketch's fan!

I am glad for your sketches to be seen.
Good stimulation was gotten.
Thank you.

What wonderful sketches these are!
Beautiful and great!
Thank you for sharing!
http://www.tinatu.com/
Top

Amazing sketches! I love all yours works

a fine tip pen and marker

this is a great idea.I like your guitarist and other people ,and the one above.
lapin
Wonderful architecture and city view.
eclecticbox
I like Lapin' back shot. I'm sorry that I can't see your other works( except Colon's sculpture on the top of the monument and portrait Dave)
http://www.flickr.com/photos/macchann/
Top

oh, great sketches everyon! love those portraits. nice to see the variety. thanks for posting so many. nice to see what barcelona is like during this time.

dave c
great sketches!! and beautiful simple style!!
I like your style very much!

lapin
wowow you are rock! I like your free style sketch on the ruled noteboook.

eclecticbox
nice sketch! I like first one very much!
PaintMonster (Sapporo /Japan)

Hi everybody!
Thanks to all for your comments!!! Specially Kumi pointing out the wrong links on my post, I don't know what the *$%&, happened!!! Since last SketchCrawl there's something wrong with them!!! I've now edited the post and added links to them... I know it's a grief to be opening new windows but that's the only solution I can think of so far!!!
However here's also the link to my whole album on Picasa:
http://picasaweb.google.com/eclecticbox ... etchCrawl#
Thanks to Lapin you'll be also able to check the results on the newly open blog for the Barcelona SketchCrawls at:
http://barcelonasketchcrawl.blogspot.com
Also here you have a few photographs I took:
Lapin and Mónica at the World Trade Centre.

And Lapin and Dave at the Corte Inglés cafeteria.