Sketch for Tuesday August 30, 2011 is of Barclay Manor, part of the Barclay Square Heritage Park at Barclay and Broughton in Vancouver's West-end. The house sits on Barclay Street between Roedde House and the Weeks House. Barclay Manor has 6 rooms available to rent for functions. The house has changed considerably since its construction in 1890 by Lucy and Charles Tetley. It began as a small "L" shaped structure which was moved 15 feet to its current location. Various additions occurred, and in 1909 architect R. J. MacDonald designed a conversion of the house into a private Hospital. From 1919 to 1926 it was known as Rosary Hall, a residence for Catholic working girls, and in 1926 it became a boarding house. The Iredale partnership designed the renovation of the building into a seniors community centre in 1990.

Please excuse the photo, it is a poor version of the original sketch with details faded and bad contrast. The original in the sketchbook is much cleaner. Soon I will start scanning the images instead of photographing the sketches. Hopefully this will yield better results. 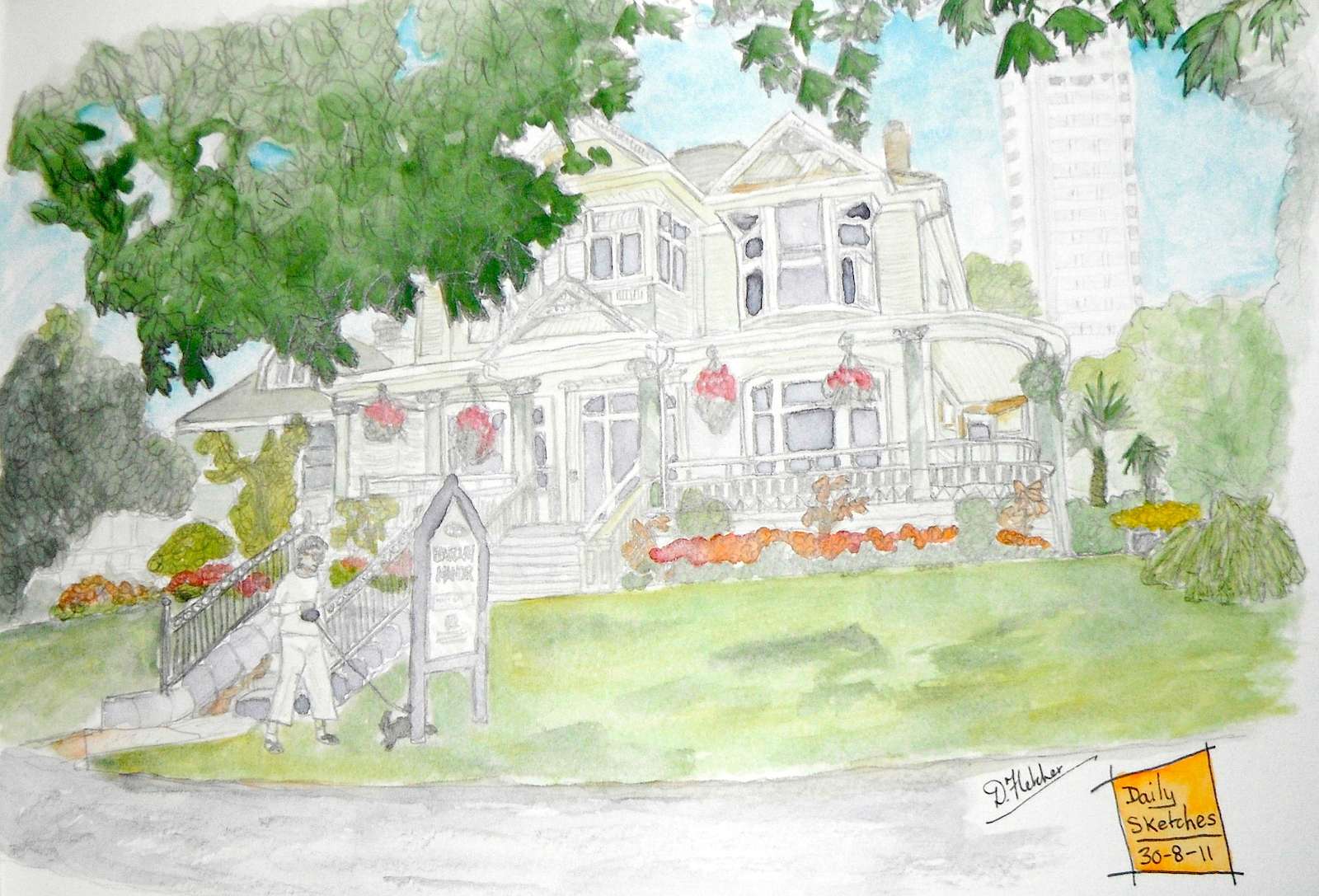 This is part of a series of sketches in progress of the West-end Vancouver.

Sketch for August 31, 2011 is of the Diamond Centre For Living (formerly the Weeks House). This building is part of Barclay Heritage Square in Vancouver's West-end. The Diamond Centre For Living, formerly known as the Weeks House, was originally built for a prominent Vancouver pioneer family.
When George W. Weeks - the builder of Weeks House arrived in the newly incorporated City of Vancouver to open it's first Hudson's Bay Company Store, the city had just 1,000 inhabitants. The year was 1886. Weeks later told a newspaper reporter that he could see the place had a wonderful future.
Weeks lived at Weeks House with his wife, Hannah, their two daughters, Hilda and Rhoda, and two sons, Campbell and Hubert. George Weeks lived in the house until his death in 1948. After George's death, the Weeks family continued living in the house. An unmarried daughter, Hilda, remained there until the late 1950s, when she sold it to the McClintock family. The Parks Board purchased the house in the mid-1960s, and Bernard Kelly stayed on as caretaker until 1994.
The exterior of the house was refurbished by the Iredale Partnership in 1990 at a cost of $120,000. In 1994, the house was leased to The Vancouver Friends For Life Society for $1 a year for 10 years, with a provisio that the necessary funds would be raised to refurbish the inside.
On December 1, 1995, the beautiful renovated home was renamed The Diamond Centre For Living. in honour of the Diamond family of Vancouver, recognizing their important role as philanthropists and leaders in renovating the wellness centre.
Today, the Diamond Centre For Living houses Friends For Life, a wellness centre providing holistic health therapies to people living with HIV/AIDS, cancer and other life-threatening illnesses. Offering a warm, supportive "home-like" environment, the house has provided a safe-haven for the nearly two decades for over 3000 individuals living with life-threatening illnesses. 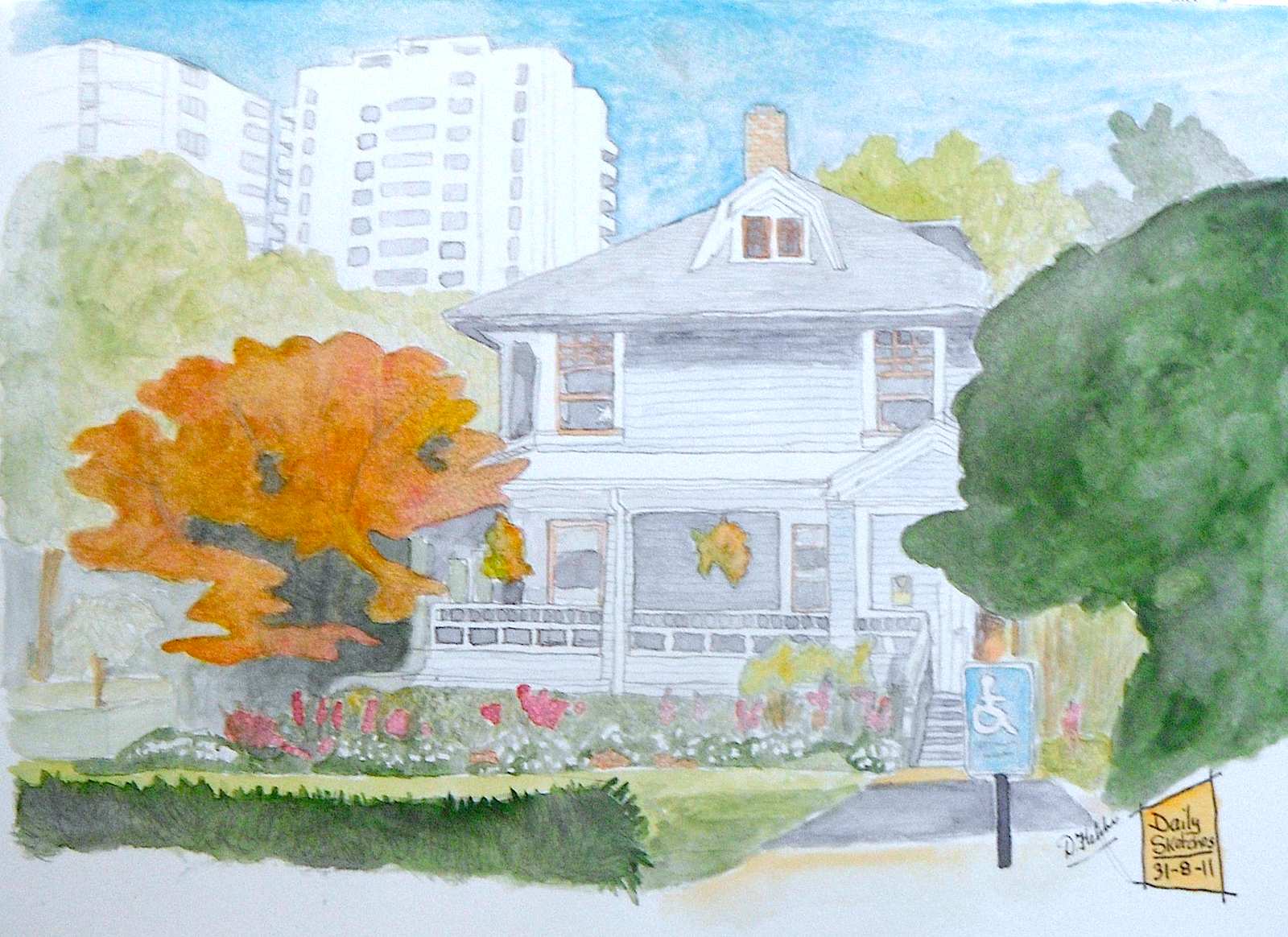 This is part of a series of sketches in progress of the West-end Vancouver.

Great series! Your sketches look so real that I feel like I have been there myself! Share more and keep working!

Reuas.. thanks for the kind words and encouragement.

The sketches are still in progress.. trying to get back to doing this series but I have been busy doing Birthday card sketches for friends and family.

I am back to working on the series sketchbook. The series will result in approximately 30 sketches with facing pages of notes/text. I am out interviewing the owners for information and showing them what has been done so far. The series has been fun, but each sketch takes a half a day outing. I am also now having to work around the weather as we have had rain lately

Here is my sketchbook cover. 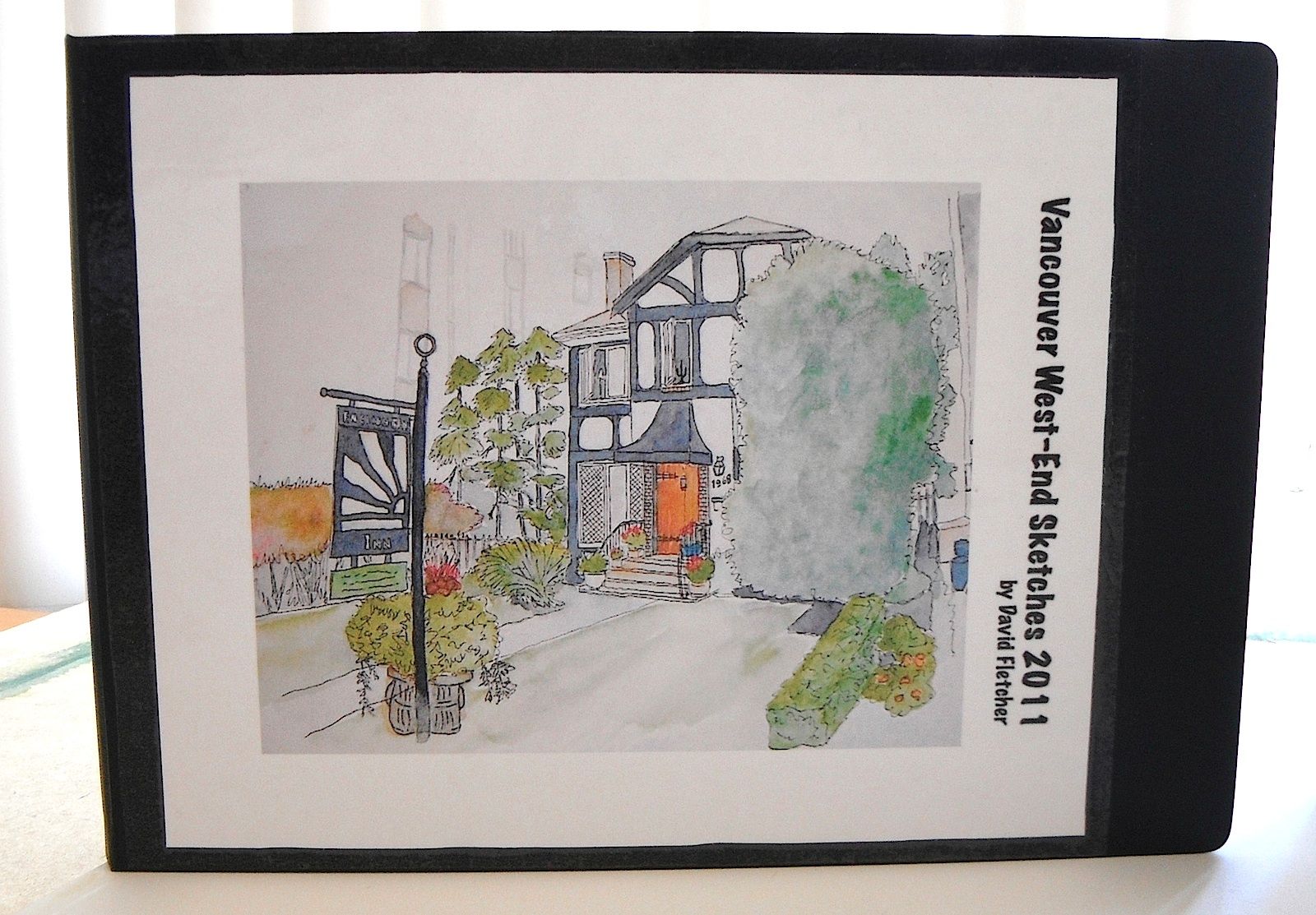 This sketch was done at the end of September on one of my visits to the Granville Island Public Market while checking this out as the site for Sketchcrawl 33 Vancouver. I finally finished adding the colour last night while watching a movie.

Lego Boy's Mom tells me you can't just buy plain Lego blocks anymore. Apparently all Lego is sold in specialty kits with this one being the Firetruck and gear. All done to ensure the parent has to keep buying the latest kit and spending more hard-earned cash... Aaah Marketing, what a wonderful process.

[edit] Oh! after publishing this post... I see that the photography work of mine was pretty bad. The original is a nice pencil and watercolour sketch, but my photo makes it a bit edgy. 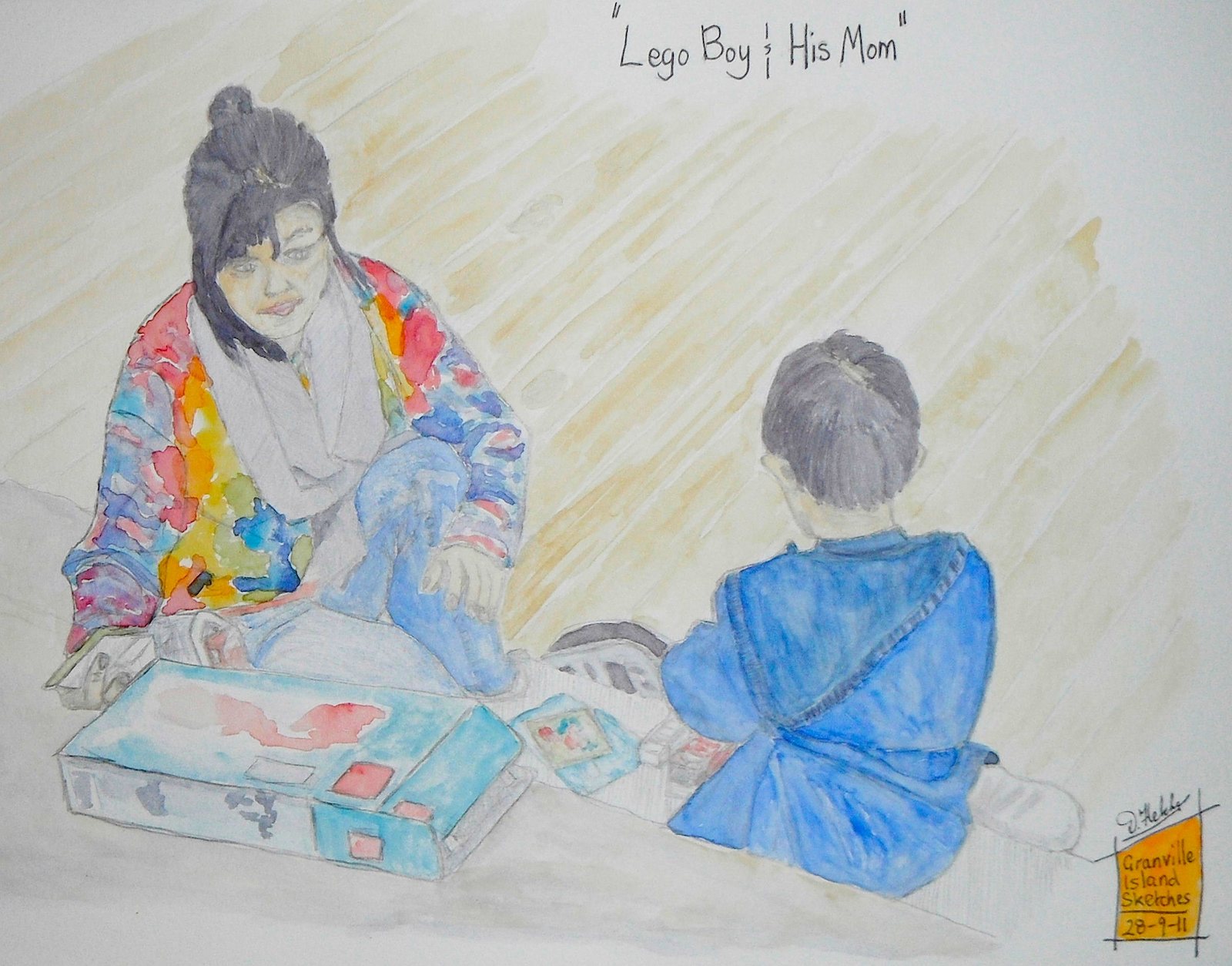 Something a little different...
I decided to try sketching something in high contrast. These were the last of the local poppies before the rain washed them away.
I did notice that large areas of black applied with a Pilot pen tend to by shiny and reflective. This causes problems when photographing the artwork, making it blotchy in some areas. The remedy appears to be to go over the black areas with some dark watercolour to take away the sheen. You can still see it in the larger view. 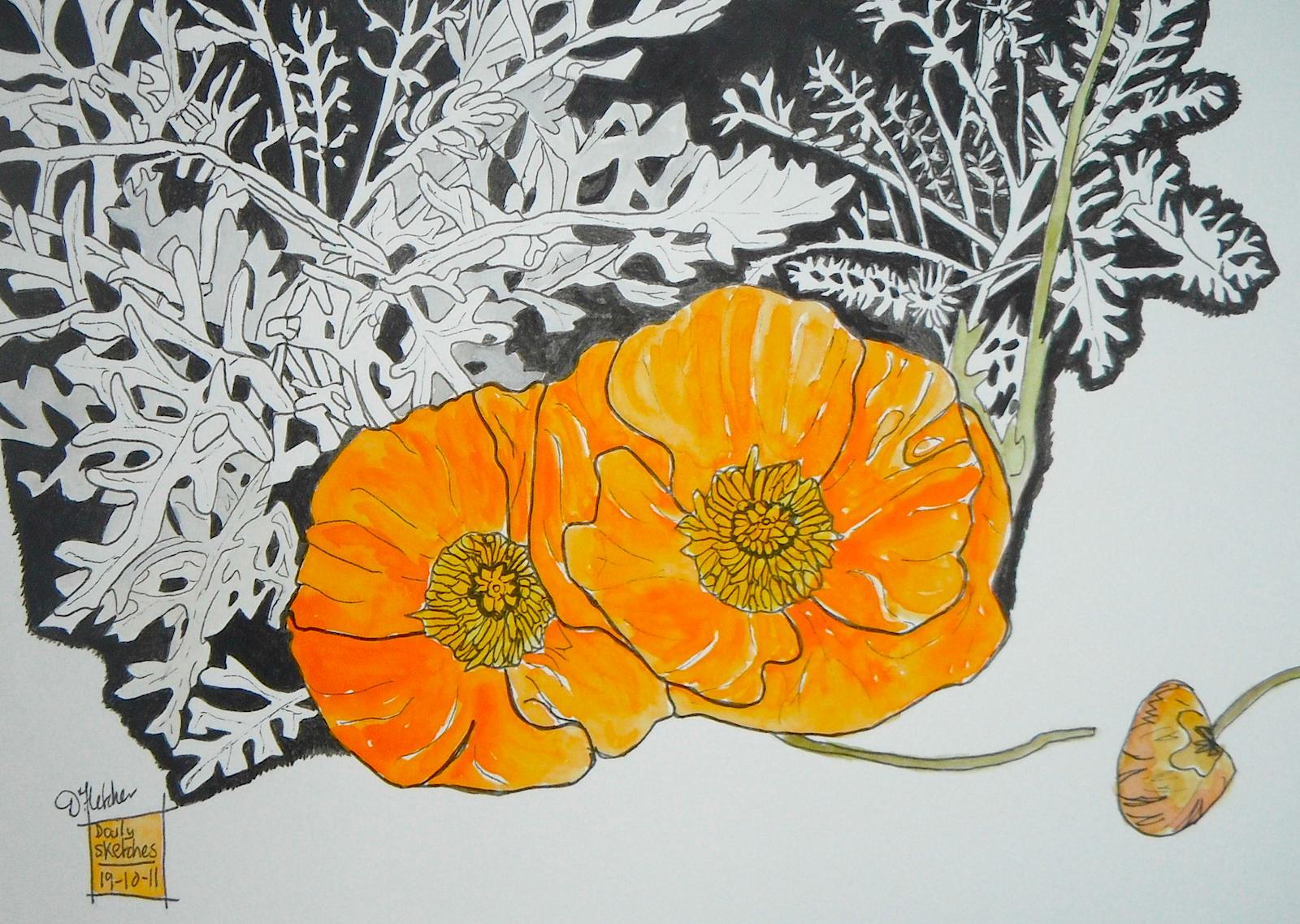 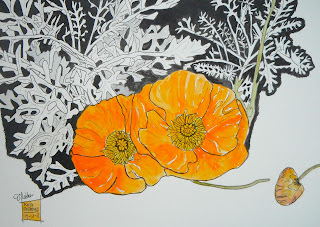